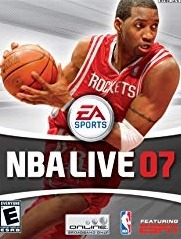 NBA Live 07 is the 2006 installment of the NBA Live series by EA Sports. It was released on Xbox, Xbox 360, PlayStation 2, PlayStation Portable, Windows, and Mobile phones. A launch for Playstation 3 was planned but was cancelled altogether due to the games ambitious design for the console

NBA Live 07 features Tracy McGrady of the Houston Rockets as the cover athlete in most versions, but some international versions have players from those areas:

Players can create and name players which can be added to the roster. Players can also be upgraded to 99 using a special feature. Although the player can be named in any way, the commentator can speak out their last name if given American names.

Teams can be unlocked by progressing through the game and completing unique challenges. The game features stars like Magic Johnson, George Mikan, Larry Bird, Wilt Chamberlain, and many others. They are all on one of the All-Star teams, which include the 50's All-Stars, 60's All-Stars, 70's All-Stars, 80's All-Stars, and 90's All-Stars.

The game features the voices of Marv Albert and basketball player Steve Kerr. This was the last NBA Live game released on the Xbox.

NBA Live 07 received "mixed or average reviews" on all platforms according to video game review aggregator Metacritic. This marks the first time an NBA Live game has been rated in this majority. In Japan, Famitsu gave the game a score of all four sevens for the PlayStation 2 version; all four eights for the Xbox 360 version; and one seven, one eight, and two sevens for the PSP version.