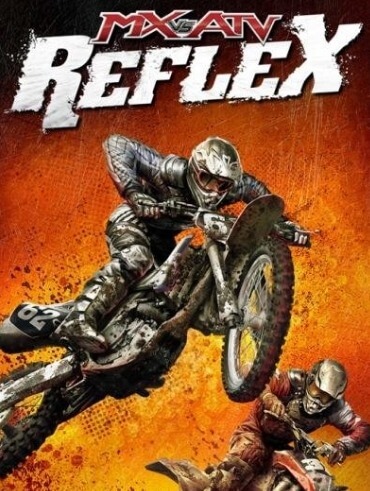 MX vs. ATV Reflex is an off-road racing video game developed by Rainbow Studios and published by THQ. It is the third game in the MX vs. ATV series.

The core focus of the game allows for the player to race motocross and supercross on motocross bikes or ATVs. The game also includes events such as omnicross, free ride, champion sport track, waypoint racing, and freestyle motocross.

Although the game is part of the MX vs. ATV series, Reflex was built from the ground up featuring a new control scheme and physics engine. The new control scheme is labeled "reflex" which utilizes both analog sticks. The left analog controls the handlebars while the right analog stick controls the rider's body movement. The reflex system allows for unprecedented control and manipulation by allowing the player to 'ride' the motorcycle and other vehicles as they actually would. Tricks have been simplified from the previous games as the player only needs to hold the modifier button and use the right stick to make different combinations and flips.

Also new to Reflex is real-time terrain deformation. Terrain deformation allows any of the different vehicles to literally carve into the earth creating ruts, berms, braking bumps and acceleration bumps as they actually do in real life. These ruts, berms and bumps are dynamic and constantly changing throughout the course of the race adding for an extra sense of realism.

Online mode consists of public and private rooms. These rooms are dedicated to specific event types (i.e. supercross) and host up to twelve players at a single time. A player's "motocard" keeps record of the player's progress through online events which earns them experience points that go towards the player's level. Mini games such as snake and tag are played online as well.

Overall reception of MX vs. ATV Reflex was positive. A large portion of praise has gone towards both the new control scheme as well as the terrain deformation. Many have acknowledged the game's successful separation of the rider from the machine with the rider reflex dual-analog control. The Metacritic average score is 78 on the Xbox 360, and 77 on the PlayStation 3.

Dakota Grabowski at GameZone gave the title an 8.0   for both the PlayStation 3 and Xbox 360 stating, "A wonderful foundation has been set and it’s now time for Rainbow Studios to expand on what they have set up with their next iterations. The future is bright and fans should be rejoicing."

GameSpot gave it a 7.0 saying "Unfortunately, things don't always work correctly in MX vs. ATV Reflex. Kinks in the physics system can lead to some unpredictable, chaotic rides." They also said, "Reflex is not a particularly good looking game on either system, with blurry, low-res textures that are distracting in the open world tracks."

IT Reviews acknowledged that "MX vs ATV isn't about pelting around with the throttle constantly revving to the max, rather the successful rider gets into the rhythm of the jumps. This is novel, and feels realistic." However, the reviewer complained about aspects of the single player game, including CPU riders who are "borderline psychopathic", truck driving that is "far too easily mastered" and a campaign mode which is "rather unimaginative and flat" on an overall level.