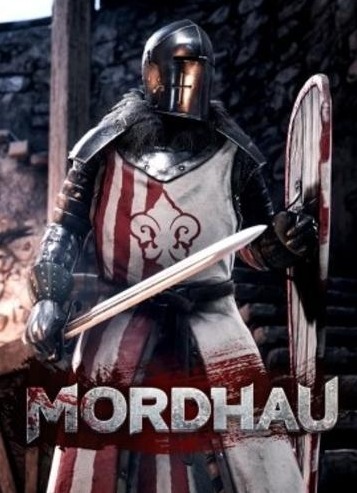 Mordhau is a multiplayer medieval hack 'n slash video game developed by Slovenian independent studio Triternion, with a prominent aspect of skill-based competitive play and customization. It features a combat system emphasizing hand-to-hand combat, loosely based on historical techniques such as feints, redirection, and alternative use of weapons. Other features include ranged weapons, siege engines and mounted combat. The game was released on April 29, 2019 on Steam.

The game was partially financed through a Kickstarter campaign in 2017, raising nearly $300,000.

In Mordhau, players engage in hand-to-hand combat with medieval weapons such as swords, spears, shields, hammers, bows, siege weapons and more. When in close-quarters combat, players can defeat their opponents by utilizing techniques like directional strikes, stabbing, kicking, dodging, blocking, and parrying while watching their health and stamina bars. Players may also ride horses in battle. The game can be played in either first person perspective or third person perspective.

Outside of gameplay, the player can edit and create mercenaries for most game modes. When creating or editing, the player can change their mercenary's body type, face, and voice for cosmetic purposes. Editing things like armor, weapons, and perks cost in-game points. Depending on what type of armor the player has it can affect the movement speed of the player like how wearing heavier armor will make the player move slower and cost more points, while there are only 3 levels of armor there are also cosmetic variations for armor. All weapons point values are roughly determined by the size of weapon as a light dagger wouldn’t be as costly as a heavy hammer. The perk system will grant the mercenary various passive abilities at the cost of points, the point value will scale higher up based off how ideally useful the perks are, an exception though, would be the peasant perk which is the most expensive perk and changes customization options.

In this game mode, up to 64 players will form into two teams. Each team starts with 1000 points, and competes with the other team to earn more points by fighting each other, capturing opposing territory and completing the team's objectives. For every enemy defeated, the other team loses a point. Capturing central or enemy territory will reduce the opposing team's points. However, completing the team's objective will instantly end the game in favor of whichever team completed their objective.

In this game mode, 64 players will compete against each other in a free-for-all match. When a player is defeated, they will lose the game and not spawn again. The last player standing will be the winner. At the start of the game, all players will spawn without weapons or armor. They must seek out chests containing equipment in order to increase their chance of survival. To avoid stalemates, a ring surrounds the entire map, and will slowly shrink to bring the players closer to each other.

In this game mode, a small team of players will be pitted against waves of computer-controlled enemies that will get increasingly harder each wave. Players will start with no weapons or armor, and their health will not regenerate normally. To regenerate health and earn weapons, the player must defeat the enemies and survive the round. Defeating an enemy will award the player a quarter of their health and currency. Completing a wave will refill the players health and award currency. Currency is used to purchase weapons and armor. All purchasable equipment is scattered all over the map, needing the player to have extensive knowledge of places like item locations.

This game is in the form of a team deathmatch; however, when a player is defeated, they will not spawn for the rest of the round. The last team standing will win the round. and play will continue until one team has won 7 rounds.

This game mode has everyone fight against each other with no teams or in a free-for-all. The first player to score the target amount of kills will win the game. Many Deathmatch servers are duel-only servers, where players flourish at each other to begin a duel.

This game mode is similar to deathmatch, except that the player will form two even teams and will compete for the most kills of players on the other team.

Mordhau became an immediate success, selling 200,000 copies in less than a week, then exceeding 500,000 copies sold by 7 May. It reached the top of the Steam sales charts. Triternion apologized after its servers couldn't sustain the massive influx of players. About a month after its release, Mordhau had sold 1 million copies; to celebrate, the developers released a new map alongside new weapons and cosmetics.

Mordhau has a rating of 80% on GameRankings, and a score of 82 on Metacritic based on 20 reviews. Prior to official release, Mordhau received praise from early reviewers for its fighting system, the chaotic but fun gameplay, and its graphics.

Reviewers enjoyed the game's intricate fighting system. James Swinbanks of GameSpot called it a "strategic, punishing and ultimately satisfying" video game. Destructoid's Patrick Hancock found it "exciting to find efficient and unique combos" that led to players developing their own unique play style. IGN's Samuel Horti enjoyed the "feeling of constant skill progression" as he gradually learnt the game's mechanics through experience and video tutorials. Javy Gwaltney of Game Informer shared this feeling, saying that "every increment of improvement is rewarded with spectacular displays of violence". However, GameSpot and IGN also shared the belief that the game's in-game tutorial could have done a better job of explaining the game's mechanics to new players. Swinbanks wrote that Mordhau did not provide adequate feedback to strikes, which made the game feel like a "slow, merciless grind of death after death" as you learned how to play. Horti wished that the game's tutorial would help him "learn by playing instead of turning to YouTube guides". T.J. Hafer from PC Gamer worried that the game's complexity might alienate players who wanted to play a supporting role in battle, stating that Mordhau "doesn’t support that playstyle especially well".