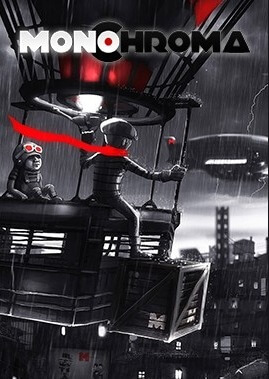 Monochroma is a cinematic puzzle-platform video game, and the first title by Istanbul-based developer Nowhere Studios. It was released on Xbox One on June 24, 2016.

The game was first announced at GDC 2013. To acquire sufficient funding for the game, the project was first revealed on crowdfunding website Kickstarter to reach a goal of US$80,000, and successfully exceeded the goal, acquiring $84,644. The game was approved on Steam Greenlight on September 19, 2013 and released on May 28, 2014.

Tom Mc Shea of GameSpot gave the game 4/10, stating that "most of the later puzzles demanding precision that's just not possible" and "there are too many problems heaping frustration upon you". Hardcore Gamer gave it a 3.5/5, saying: "The colorless world may have drained the life from everything in it, but its endless challenges can’t leech the determination of a boy intent on keeping his brother safe."   Niche Gamer believed that "platforming fans will feel disappointed, and puzzlers may not feel the game is quite satisfying enough. The overall experience, however, is good enough, just."