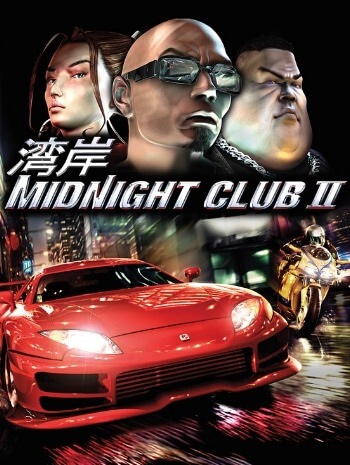 Races consist of a series of checkpoints, represented by columns of light. In most races, the order in which the checkpoints must be cleared is prescribed. In this case, a transparent, glowing arrow points to the next checkpoint. In a few other races, the checkpoints may be cleared in any order. In that case, the arrow spins randomly without pointing in any particular direction. It is up to the player which route to take from one checkpoint to the next. There are no artificial barriers in the game's open world environment that force the player to stay on a specific course. Any area that is drivable or jumpable in the free-roaming cruise mode between races may be used to get to the next checkpoint.

Some areas can be driven upon that are not intended for such use outside of a computer game. Examples are escalators, roofs, railways and riverbeds and many ramps. However, many areas that would be drivable in reality, for example entrances and some stairs, are fenced off with invisible barriers. In some areas, the player can jump or drop down. Using this to the player's advantage can be necessary in order to win a race. If the car falls into deep water, the damage meter goes to its maximum stage and the car is instantly totaled, the race being immediately lost.

The game also features damage models. The amount of damage inflicted upon a car is indicated by both an HUD indicator and visual damage to the car. The performance of a car does not degrade with damage like some other racing games. When the damage limit of a car is exceeded, the car explodes or stalls. After a delay of a few seconds, the player can continue with an undamaged version of the same car.

Dry, hilly suburbs and congested interstates can be found throughout Los Angeles, and just like Midnight Club: Street Racing, the city contains many landmarks, as well as numerous shortcuts and jumps. Paris is the home to cobblestone alleyways, monumental roundabouts, and the Paris Catacombs. Also featured are a lot of jumps taking you across the river of Paris and into alleyways. Tokyo is a city of neon-glittering avenues and tight alleyways, and contains an equal array of tourist sights and attractions.

The vehicles in Midnight Club II all resemble real-life vehicles but have subtle differences to their counterparts, such as different headlamps or tail lights. Also, most of them have aesthetical modifications commonly found in street racing and import scenes, such as spoilers, hood scoops, and body kits.

In the car selection menu, descriptions and stats of each vehicle can be seen, along with the option to choose among 4 colors. Once a car is viewed, a sound effect unique to that car is played in the background.

Each character will cruise around the city, waiting for a challenge. This excludes Moses, who helps the player begin the Career Mode, as well as the four champions who will seek you out after all predecessors are beaten. They will talk to the player or "think out loud" during pre-race cut-scenes, during which the player can discover their motives, learn the statistics of their vehicle, and preview each character's theme song.

The album was released at E3 in 2003 as a promotional gift. It consisted of mainly electro and trance music along with rap music. The soundtrack contains 38 tracks.

Entertainment Weekly gave it a B+ and stated that, "Whether racing against the clock or attempting to beat the other drivers in checkpoint contests, memorizing the maps and finding the many shortcuts is crucial." The Village Voice gave the PS2 version a score of eight out of ten and stated that "The only way Rockstar could make the game better would be to set it in Boston, where drunks get kicked out of the bars long after the T has shut down, flooding construction-choked highways." Maxim also gave the game a score of eight out of ten and said that "It may not boast garages bloated with the usual name-brand chick magnets you find in other racing games, but the dark racing underbelly of Midnight Club II has every bit as many thrills as the leading grease monkey autopia." However, Playboy gave it 75% and said that, "Touchy controls require precision to avoid wrecking or, even worse, forking over your ride to a Frenchie."

The game has sold 1.28 million copies worldwide on the PlayStation 2 version.