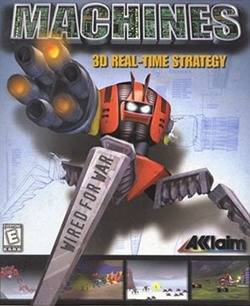 Machines (also known as Machines: Wired for War) is a 3D real-time strategy game released for Microsoft Windows. Published by Acclaim and developed by Charybdis, Machines was one of the first 3D games of this genre. It also allowed players to directly control units with both a first and third-person view.

Machines uses a 3D polygonal landscape, which players can use to their advantage, attacking from or hiding behind hilltops. The viewpoint can be switched between a default isometric, strategic 'zenith' camera, and first person perspective; the latter typically being used to explore buildings during espionage missions.

Machines is multiplayer over a LAN or the internet.

Next Generation reviewed the PC version of the game, rating it three stars out of five, and stated that "At the end of the day, Machines doesn't really add anything to the RTS genre, but it's well-crafted, solid game that's original enough to keep your attention for as long as it takes to beat the game."

GameSpot awarded the game 6.5 out of 10, praising the impressive graphics and camera modes but highlighting the poor unit pathfinding and unoriginal gameplay.

GameMonkeys gave it 4 out of 5, saying that the game had "great graphics, and totally in-depth gameplay".

IGN awarded the game 7.2 out of 10, with the reviewer opining, "I'm sold on the different views in the game. That alone makes it stand out enough to be noticed. In addition to that however, Machines is a pretty solid strategy game."