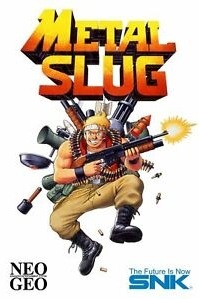 Metal Slug: Super Vehicle-001 (メタルスラッグ Metaru Suraggu), more commonly known as simply Metal Slug, is a run and gun video game developed and originally released by Nazca Corporation and later published by SNK. It was originally released in 1996 for the Neo Geo MVS arcade platform. The game is widely known for its sense of humor, fluid hand-drawn animation, and fast-paced two-player action. It is the first title in the Metal Slug series. It has been ported to the Neo Geo AES, Neo Geo CD, Sega Saturn, PlayStation, Virtual Console, PlayStation Network, iOS, Android and Neo Geo X, and to the Wii, PlayStation Portable, PlayStation 2, PlayStation 4 (as part of the Metal Slug Anthology) and Nintendo Switch.

The player(s) must shoot constantly at a continual stream of enemies in order to reach the end of each level. At this point, the player confronts a boss, who is usually considerably larger and tougher than regular enemies. On the way through each level, the player can find numerous weapon upgrades and "Metal Slug" tanks. The tank is known as the SV-001 ("SV" stands for Super Vehicle), which not only increases the player's offense, but considerably adds to their defense.

In addition to shooting, the player can also perform melee attacks by using a knife. The player does not die simply by coming into contact with enemies, and correspondingly, many of the enemy troops also have melee attacks. Much of the game's scenery is also destructible, and occasionally, this reveals extra items or power-ups, although most of the time it simply results in collateral damage.

There are a total of six levels, in locations such as forests, garrisoned cities, snowy mountain valleys, canyons, and military bases. The vast majority of enemies are soldiers equipped with weaponry befitting their specific role. There are also several mechanized enemies, such as tanks, mobile artillery, aircraft, armored personnel carriers and technicals. Much of the game's humor comes from how the enemies are depicted; the player often encounters them as they are sunbathing, roasting food over a fire, or simply conversing amongst themselves. They also tend to scream loudly if they see the player, and often try to either run away or fight back.

The American version changed the color of the soldiers' blood from red to white.

It was the year 2028. The evil General Morden and his rebel army has launched a coup d'état on the world's governments, and all attempts by the armies of the various countries to curtail his growing power fail. His most recent attack has given him access to a new form of all-terrain combat tank dubbed "Metal Slug". In a last effort to stop Morden, Cpt. Marco Rossi and Lt. Tarma Roving of the Peregrine Falcon Strike Force are sent to locate and eliminate his powerbase, as well as reclaim or destroy any Metal Slugs they can find so as to keep the technology out of Morden's hands. After battling their way through hordes of Morden's soldiers, the duo eventually face off against Morden himself, in a heavily armored helicopter. After defeating the helicopter and seemingly killing Morden, they destroy his base of operations. In an epilogue, one of Morden's men is shown throwing a paper airplane from a cliff face. As the credits roll, the plane flies across the various levels of the game, from the destroyed Metal Slugs on the forest and the city where a woman grieves for her slain lover who is a Rebel Army member before disappearing into outer space. If the game is completed using 2 players, the epilogue changes to show the rebel soldiers dancing around the various levels to a very upbeat tune. This time, the paper plane is caught by a wounded but still alive Morden, who unfolds it before looking up to the starry sky.

Upon its initial appearance, Metal Slug received mixed reviews. The four reviewers of Electronic Gaming Monthly heavily criticized the game's unfair difficulty and one-hit deaths, remarking that playing through the arcade version requires an inordinate amount of quarters, while the Neo Geo AES version's lack of an option for limited continues means players of all skill levels can complete it in a single sitting, with no motivation to play again or improve one's skill at the game. However, they also concurred that the game is fun, chiefly due to its smooth and humorous animations. GamePro agreed that the Neo Geo version suffers from low longevity, with too few levels and a complete lack of replay value, and also criticized the slowdown in the game. However, the reviewer approved of the graphics, music, and arsenal of weapons, and summarized the game as "a soldier-slamming, side-scrolling, tour de force that dwarfs recent side-scrolling Neo shoot-em-ups, including the system's strongest platform offerings like Cyber-Lip and Top Hunter."

Next Generation reviewed the Saturn version of the game, and stated that "In the end, Metal Slug is not a game players will really obsess over. However, the easy and exciting gameplay will have players returning to it often, which is probably why SNK decided to bring it to the States."

When the game was released on the Virtual Console in 2008, IGN's Lucas M. Thomas scored it 8.5 out of 10, and awarding it an "Editor's Choice" badge; "Metal Slug is arguably the most notable Neo Geo action game ever made. It's an excellent game to play through yourself, and even better when tackled with a friend through its co-op mode." Eurogamer's Dan Whitehead wasn't quite as impressed, scoring the game 7 out of 10. Although he praised the original game, he was critical of the port, criticizing the lack of support for online multiplayers, in comparison to the Xbox Live release, and writing "A fantastic game then, in a slightly inferior technical presentation that offers poor value compared to the other available methods of sampling this fine shooter. Truly, Nintendo giveth and Nintendo taketh away."

In a retrospective review, Neo-Geo.com scored the game 9 out of 10; "coming back to Metal Slug feels like returning to visit an old friend--it's just as good as you remember it no matter how long it's been since you last saw each other. Metal Slug is not only an insane amount of fun--it's also one of the best games to illustrate the genre, and among the best titles on the Neo, period."

All games from the serie "Metal Slug"

In the Hunt
hit
upd
new