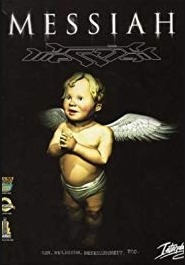 Messiah is an action-adventure video game developed by Shiny Entertainment and published by Interplay. The game was promoted for its tessellation technology, which was claimed to drastically increase or reduce the number of polygons based on the speed of the system running the game. Messiah received a mixed response from reviewers.

The player controls Bob, a putto sent by God to clean up the corruption and sin on Earth. After making his way through the world and defeating a genetically modified super-human, Bob is asked to return by God, telling him that if humans are prepared to tamper with His creations, there is no place for Him on Earth and leave them to their own devices.

Bob refuses and this act of defiance attracts the attention of Satan, who follows Bob and attempts to lead him astray. As the story progresses, it becomes clear that Satan is behind the corruption on Earth, and it is up to Bob to stop him.

The game is set sometime in the distant future. The environment is a comedic take on a cyberpunk city. The levels are large and relatively open in both the horizontal and vertical dimensions. The player, as Bob, is able to fly around at great heights, although his small wings can only carry him a limited distance from the ground, necessitating a combination of climbing and flying, and so the gameplay environment features a great deal of vertical movement and exploration.

While in his cherub form, Bob is defenseless and can very easily be killed; however, he may possess any biological lifeform by jumping into their body. The most common type of lifeform is human, and Bob will spend much of his time jumping from one to another. Other examples include rats, cyborgs and aliens. In more difficult levels, Bob can only possess another body when the target is oblivious to his presence, thus adding a stealth element to the game.

Once in control of a host, he can interact with the environment and non-player characters (NPCs) by using switches or weapons and fighting in unarmed combat. Some switches require a specific human host to activate (e.g. a scientist is required to access a secure laboratory area, or a radiation worker to handle live nuclear material); these form the basis for the game's puzzles. Other puzzles include using Bob's wings to access somewhere out of reach or too small for a host body to enter.

Most humans will ignore Bob, or be intrigued by him. The police and security force, however, will shoot on sight, as will the Chots - a separatist, cannibalistic humanoid race who regularly appear in street battles with the police in hopes of driving the Fathers out of power. As Bob progresses through the game, his reputation precedes him, and he is actively sought after by the police.

Lead designer David Perry intended Messiah to be targeted towards adults, in contrast to Shiny's previous games such as Earthworm Jim.

The development team heavily touted the game's tessellation technology, which they said could reduce or increase the number of polygons displayed in real time based on the hardware running the game, thereby maximizing the level of detail possible on any given hardware setup, stabilizing the frame rate, and enabling real-time interpolation and volumetric lighting.

The character models were built in 3D Studio. The game's characters were all animated using motion capture, with a person with dwarfism serving as the motion capture actor for Bob.

In February 1998, a couple years before Messiah was released, the Los Angeles Times reported a public outcry over the title. Lead designer David Perry explained, "It's crazy that all these people are already upset and they haven't even seen the game." Jeff Green of Computer Gaming World stated, "You can't use the word 'messiah' and not know you're going to tweak the sensibilities of the religious community." The developers received upset responses from many Christian organizations, including one that insisted Shiny was "violating the Catholic Church's moral copyright".

Part of the game's soundtrack was contributed by industrial metal band Fear Factory, and was later released as Messiah.

According to author Erik Bethke, Messiah was a commercial flop, with "fewer than 10,000 units sold in its first three months".

Response to the game was polarized, some responses being very positive and some being very negative. This came not only from the game's subject matter and outlandish concept, but also from its game engine. Depending on the hardware at the time, the game would perform fairly differently player to player because of its adaptive engine. Also there were a number of glitches and errors that were patched in a version released soon after.

The game received "average" reviews according to the review aggregation website GameRankings. The earliest review came from Edge, which gave it a score of seven out of ten, nearly two months before the game itself was released in North America, and over seven months before its European release date. Computer Gaming World gave the game a 1.5 out 5 and declared the title "truly repellent - I don't even like to think of the sort of sadist who would enjoy it." The review detailed that beside "a level of sexism that goes beyond the usual demeaning stereotypes" and "adolescent edginess" that "there's a general atmosphere of cruelty, of enjoying violence not for the adrenaline rush of the action or even for the fun of cartoonish bloodshed - but for the realistic pain it causes."