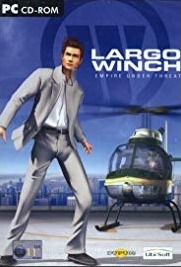 Largo Winch: Empire Under Threat is an action-adventure video game released in 2002 by Dupuis only in Europe. It is a puzzle-based third-person adventure game with Largo himself as the playable character. The plot of the game follows the usual scenario of Largo Winch stories, with his business empire under threat as he fights to save it, with location in New York - Veracruz, Mexico - Russia, Siberia - Sardinia - and Nerio's Island Sarjevane, Adriatic Sea.