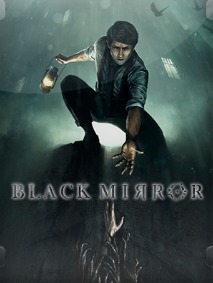 Black Mirror is a 2017 gothic adventure video game developed by King Art Games and published by THQ Nordic. The game is a reboot of The Black Mirror series, a trilogy of point-and-click games for Microsoft Windows.

The game features a new setting and cast of characters from the original title. Set in 1926, players control David Gordon, who travels from his home in the British Raj to his ancestral homeland of Scotland, following the suicide of his estranged father, John Gordon. John was an avid enthusiast of Occultism, and the final weeks leading to his death remain a mystery. Given these suspicious circumstances, David begins an investigation into the suicide of John.

Unlike the original trilogy, which was point-and-click in nature, Black Mirror is a more traditional graphic adventure title. Players are free to explore the mansion at will, interacting with various objects in the environment to collect items and solve puzzles. Various characters can be found within the mansion including members of the Gordon family and staff, who may have information that can aid the investigation. As the story progresses, more areas of the Gordon's property become available.

The game was announced on August 16, 2017, with a trailer and November 28 release date being given. The title launched as intended on November 28 for Linux, Microsoft Windows, OS X, PlayStation 4, and Xbox One. Physical copies were produced for the console versions, while the Linux, Windows and OS X releases were digital exclusives.

Black Mirror received mixed reviews from critics, according to review aggregator Metacritic. The title was generally praised for its story, puzzles and art direction, but received criticism for its short length compared to other games in the series and technical issues, including glitches, bugs, poor graphics, and long load times.