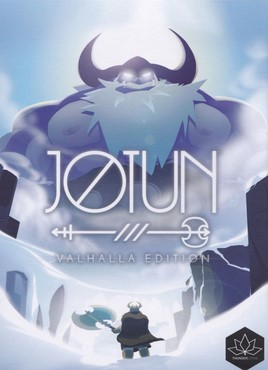 The story follows Thora, a recently deceased Viking woman. Having suffered an inglorious death, she must travel across the realms defeating Jotun, giant elementals of nature, chaos, power, etc. This will allow her to impress the gods and enter Valhalla.

Jotun uses a hand drawn, frame-by-frame art style. Aside from the boss battles, the game revolves around exploration and puzzle solving, with a few enemies to fight. Exploration typically involves exploring various stages, with some giants to fight and various puzzles to solve. Puzzles often employ using axe swings to interact with objects (i.e. trees, boulders, and vines) and some other types of puzzles. In each stage, there is a Rune, an object the player must reach to continue the story, and a God Shrine, at which Thora can unlock and upgrade God Powers. There are also secret locations containing Ithunn's Apples, which give a permanent buff to Thora's health. Combat in the game is relatively rudimentary, with the main actions being an axe swing, axe chop, and dodge. The axe swing is the game's heavy attack: it takes a long time to perform, but does more damage than the axe chop. The axe chop is a light attack, which can be performed in a 2-hit combo, or a 3-hit combo and does small amounts of damage. Finally, the dodge is a roll, which the players can use to avoid attacks and (after the 2-hit combo) can dodge and swing for a third strike. Players can also use one of the God Powers: Frigg's Healing, Freya's Speed, Thor's Hammer, Odin's Spear, Loki's Decoy, or Heimdall's Shield. God Powers initially start off with two charges, but only a few can be upgraded to three, but all may be replenished at Mimir's Wells.

The hub of the game is known as Ginnungagap (the Void), from which players can access five areas. Each area consists of two stages, with the exception of Jera (which only has one stage). Once Thora collects the rune of both stages, she can advance to the boss fight, where she fights one of the five giants. After defeating the boss of the area, Thora will give some information about her life before her death.

The game was first announced at PAX 2015, accompanied by screenshots and a gameplay video. The game was released in September 2015 on PC, and will later be on consoles. The game had a successful crowdfunding campaign which raised over $64,000 from 2,299 backers on Kickstarter. Additional funding came from the Canadian Media Fund and the Montreal Inc Foundation.