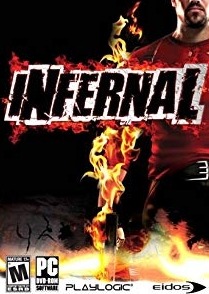 Infernal is a modern-style third person shooter, with major first-person shooter influences. Players control protagonist, Ryan Lennox, a former angel turned dark by unfortunate circumstances who has access to a number of unique demonic powers, including pyrokinesis, teleportation, and the ability to feed on the souls of fallen enemies.

Most of the reviews state that the game lacked polish and called it last generation compared to current third person shooters of the time such as Gears of War and Resident Evil 4. On the other hand, some reviews said it had good graphics and called it "mindless fun."