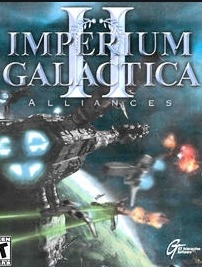 Imperium Galactica II: Alliances is a video game featuring aspects of real-time tactics, real-time strategy and 4X elements from the Hungarian-based studio Digital Reality in 1999. It is the sequel to Digital Reality's previous game, Imperium Galactica. In 2016, the game was ported to iOS. The North American release is the final game to be released under the GT Interactive brand name, released shortly before Infogrames folded the label into its own studio in May 2000.

The story of Imperium Galactica II is not entirely linear. Instead, what is featured is several scenarios pitting one Empire against another, and the main campaign, where the player can choose one of three factions: The Kra'hen Empire, The Shinari Republic, or The Solarian Federation. Each race has different objectives in their respective campaigns, and the player can only win the campaign by meeting these dynamic goals or conquering the galaxy by eliminating all other factions.

Kra'hen Empire – As part of a brutal and bloodthirsty race, your race has a fetish for collecting the heads of your enemies (as soon will be revealed in the gameplay videos) and is entering the galaxy occupied by the other seven races in the game. As Imperator, your objective is to do whatever is necessary to appease your God-Emperor. His orders - to eliminate all other races from the galaxy, and bring their heads to him!

Solarian Federation – Legend tells of four "Tears" (Data Crystals) strewn across the galaxy by your ancestors that have the power to make the Human race invincible, including resurrecting their dead leader. Representing the humans of the far-future, your Solarian Empire must recover these Tears through diplomacy, trade, and war. It is eventually discovered that many of the other races in the game such as the Iberon, Godan, and Toluen, were genetically-altered humans adapted to conform to specific climates.

Shinari Republic – As the weakest race militarily, the Shinari Republic resorts to espionage and trade to turn things to their advantage. Upon encountering the Kra'hen, you must aid the Solarians in uniting all the other races in the galaxy to face this common threat. But when the Kra'hen are defeated, you turn down the Solarian Federation's offer for a galaxy-wide alliance because "war is good for profit" - instead, you must somehow reanimate the mad Solarian Emperor Kaileron, whose clout and radical views would certainly plunge the galaxy back into conflict.

There are eight unique races, which all have their own unique advantages and disadvantages in technology, diplomacy, and breeding.

During the Campaign a few other races and factions races are observed.

In North America, Imperium Galactica II sold 50,843 units and earned $2.02 million from January through October 2000, according to PC Data.