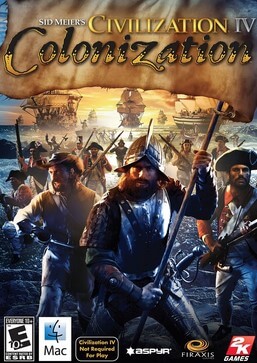 Sid Meier's Civilization IV: Colonization is a remake (a total conversion using Civilization IV engine) of the 1994 turn-based strategy game Sid Meier's Colonization. Players control settlers from one of four European nations, Spain, England, France, or the Netherlands, that are trying to conquer/colonize the New World in the period between 1492–1792. The final goal of each player is to build up their colonies and a standing army, then declare independence from their mother country and defeat the military force that the King sends to crush the rebellion.

In order to build and expand their cities, players must balance negotiations with several separate groups: the natives of the Americas, colonists from the player's home country and other colonists from the old world. Players may also recruit founding fathers to join their cause, each with a specific bonus that helps throughout the game. The player influences the direction of his colony through choices in diplomacy, recruitment and city management. Additional colonists from Europe or converted natives can result in population increases after food surpluses exceed a preset level.

Economics and trade come into play when the player makes finished goods and sells them in Europe or trades with the natives for other goods or gold. By harvesting natural resources, skilled craftsmen can convert them into finished goods for sale or trade. Additionally, silver can be mined for direct trade and ore can be mined to turn into tools and then in turn guns. Skilled craftsmen produce twice as much as regular workers and specialist buildings can be built to increase overall production as well.

The player's selection of nationality, made at the start of the game, affects the colony's standing in the world: the English receive an immigration bonus, the Dutch enjoy trade bonuses, the French diplomacy edge encourages more favorable relations with native tribes, while the Spanish Conquistador bonus favors conquest against the natives.

Civilization IV: Colonization has many new gameplay mechanics. When starting the game, in addition to choosing a starting European nation, a player chooses between two governors, each with different advantages. In addition, national borders is a gameplay concept taken from Civilization IV. This means that rivals cannot pass into each other's land unless they have an open borders agreement — or they have declared war.

Unlike the original Colonization game, nations cannot recruit the same founding fathers. Each founding father is recruited by one and only one nation/player. Moreover, founding fathers will only join nations with certain criteria, namely a certain level of "points" obtained in various categories (political, military, exploration, religion, and trade).

After the player declares independence, players draft a constitution determining the government style of their independent nation. For example, if a nation chooses a monarchical system, then it can still trade with Europe during the war for independence.