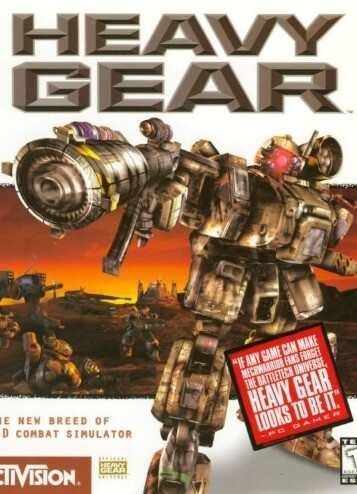 
Heavy Gear is a 1997 computer game made for the Windows 95 operating system, based on the Heavy Gear role-playing game. A sequel, Heavy Gear II, was released in 1999.

The story follows the crew of the CNCS landship Vigilance (an enormous hovercraft carrier) as they played a cat-and-mouse game across the badlands with a rival landship from the AST, the Draco.

Faced with the loss of the BattleTech-MechWarrior property, Activision acquired exclusive worldwide rights to video games based on the Heavy Gear series. Heavy Gear was developed by largely the same team which created Mechwarrior 2, though with the significant addition of Frank Evers, then best known for Earthsiege 2. The game used an enhanced version of the Mechwarrior 2 game engine, and was partly derived from existing MechWarrior 2: Mercenaries code. Before the release of the PC game, an arcade version based on the Virtuality Hardware Platforms was developed but never released.

In Computer Gaming World, Greg Fortune wrote, "The most disappointing thing about this game is that you see lots of parts of the game that really do show care and creativity." He considered Heavy Gear a missed opportunity that failed to live up to its competitor, the MechWarrior franchise. Fortune concluded, "As it stands, the game feels more like a beta than a finished product and is woefully incomplete in many areas." Alex C of Computer & Video Games dismissed the game as "yet another tweak to the aging MechWarrior 2 engine."

Next Generation reviewed the PC version of the game, rating it three stars out of five, and stated that "In creating Heavy Gear, Activision has a different universe and a better engine but a roughly designed game. Mechwarrior 2 still holds the edge with flamboyant mech designs and a sweeping storyline."