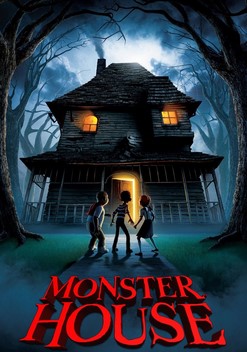 Haunted House is an Atari 2600 video game written by James Andreasen and published by Atari, Inc. in February 1982. The player, represented by a pair of eyes, must navigate the haunted mansion of the late Zachary Graves to recover the three pieces of an urn. The game has been identified as one of the earliest examples of the survival horror genre by a GameSpy article.

The house has three floors and a basement. The player's character may pick up only one of three items at a time (a key to open doors, a sceptre to ward off evil spirits, or the urn) and must avoid a bat, a tarantula, and the ghost of Mr. Graves himself. If the player is hit by the monsters nine times, the game ends. If the player escapes the house with the urn, the player wins.

The items (and house layout in higher difficulties) can only be seen when the player uses the 'fire' button on the joystick to light a match, illuminating a small radius directly around his character; this can be done an infinite number of times, although the match only lasts for a limited amount of time before being snuffed out. If a monster enters the same room as the player, a howling wind from the monster will blow out any lit match.

Haunted House has a total of nine different levels which make the game more challenging; in particular, later difficulty levels make the walls of the house itself invisible unless the player lights a match.

Electronic Games in 1983 stated that Haunted House's graphics were "on the simple side, but the effect of creeping through the darkened rooms is very well done".

Richard A. Edwards reviewed Haunted House in The Space Gamer No. 54. Edwards commented that "There are no drawbacks that come immediately to mind about Haunted House. This is a sure winer and should be spirited away from your nearest store."

In 2010, a sequel by the same name was released by Atari who revamped Haunted House with updated graphics for Windows, the Wii, and Xbox Live Arcade. It was released for Windows on September 28, 2010, for the Wii on October 5, 2010 and on Xbox Live Arcade on October 28, 2010. The game takes place 30 years after the original protagonist was implied to have mysteriously vanished inside the mansion, with his grandchildren searching for him inside the mansion.

An unofficial sequel to the game, titled "Return to Haunted House," was one of the several built-in games included in the second rendition of the Atari Flashback, a line of plug-and-play game systems. It used Adventure's source code and graphics and was not included on any other Atari Flashback releases.

A new installment of the series, titled Haunted House: Cryptic Graves, was announced on September 1, 2014 and was released on November 25, 2014 for the Microsoft Windows. Upon release, the game received negative reviews from critics.