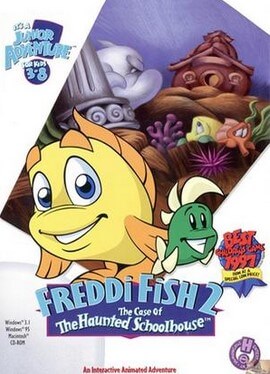 Freddi Fish 2: The Case of the Haunted Schoolhouse Download PC

Download Freddi Fish 2: The Case of the Haunted Schoolhouse Free for PC Torrent

Freddi Fish swims in the Mediterranean Sea on her way to school. She eventually waits for Luther, who brings his Codfish Commando Action Figure for show and tell. As they enter the classroom, they see that the guppies of their class are hiding. Mrs. Croaker explains that the guppies saw a ghost that steals their toys. While one of the students tells the story, the ghost appears and surprises everyone. While the class gets scared, the ghost swipes down and grabs Luther's action figure. After Luther shouts at the ghost, it gets away. Freddi thinks the ghost isn't real, and promises everyone that she and Luther will find it.

They eventually chase the ghost into the school basement. Freddi commands the ghost to stop, causing it to accidentally drop Luther's toy. Luther manages to retrieve the toy, and the ghost says that it will get it back and leaves, leaving behind a torn piece of sheet. Freddi believes that the ghost is really fake, and decides to build a trap in the basement. They are going to need five more parts in order to set up the trap. However, they need to search around the school to find more parts for their trap.

The game uses exactly the same mechanics as its prequel, but contains newer puzzles, collectible and usable items, character encounters, locations, minigames and trivial click spots in the gameplay. The particular parts and pieces for the ghost trap are randomised in every new game.

Freddi Fish 2: The Case of the Haunted Schoolhouse System Requirements

(0) Comments on "Freddi Fish 2: The Case of the Haunted Schoolhouse Full Version"