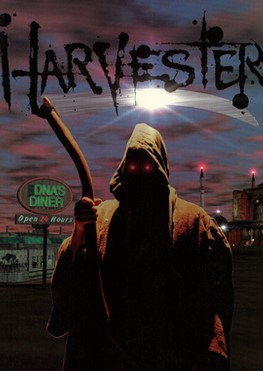 Harvester is a 1996 point-and-click adventure game written and directed by Gilbert P. Austin, known for its violent content, cult following, and examination of the relationship between fictional violence and actual violence.

The game stars Steve, who awakes with a case of amnesia in a strange town in 1953 called Harvest. No one there believes he is genuinely amnesiac. All of the town inhabitants are extremely eccentric and many appear to be more a satire or stereotype than real people. They all continuously stress to Steve that he should join the Lodge, a large building (reminiscent of the Hagia Sophia) located at the center of town that serves as the headquarters of the Order of the Harvest Moon. Steve visits the Sergeant at Arms at the Lodge, who tells him that all of his questions will be answered inside the building. To enter, he must first join the Order of the Harvest Moon. But in order to join, he must perform a series of tasks that range from simple vandalism to arson for his initiation.

While snooping around town, performing these tasks and learning more about Harvest, Steve visits the Pottsdam residence. Here he meets the overweight and perverted Mr. Pottsdam, who tells Steve that he is to marry his daughter, Stephanie, in a few weeks. Steve meets his alleged wife-to-be upstairs. She explains that she has amnesia as well, and, like Steve, notices that something doesn't seem right about the town. Over a series of days Steve successfully performs all of the required tasks. When he visits Stephanie in her room, he finds nothing but a mutilated skull and spinal cord. He takes it to the Sergeant of Arms and asks him if this is really the remains of Stephanie, to which the Sergeant explains that, inside the Lodge, he will learn the truth, and grants Steve access.

Inside the Lodge Steve visits three floors consisting of mayhem and murder. He must solve various puzzles along the way as well as visit different rooms, referred to as “temples” by their occupants, where he must take on several moral decisions. Eventually he makes it to the Inner Sanctum, where he talks to Principal Herrill of Harvest's Gein Memorial School, who explains that he is second in command of the Harvest Order and is to be addressed as Vice Muck Herrill. The head of the Harvest Order, the Grand Muckity Muck, shares a few short words with Steve, and then attacks him. Steve kills the Grand Muckity Muck and meets the Sergeant at Arms one last time.

He reveals Stephanie to him, who is alive but hooked up to a special torture device, which gave her pain whenever Steve climbed a rope in the Lodge. He releases her from the device and explains to Steve that everything in Harvest is created by a virtual reality simulator, which he and Stephanie are hooked up to. The Sergeant at Arms explains that this simulation was created in hopes of successfully turning Steve into a serial killer in real life. He then gives Steve an ultimatum: Marry and live out the rest of his life with Stephanie in the virtual reality that is Harvest or kill Stephanie. She will die in real life but Steve will be released and free to live in the real world as a serial killer.

If the player chooses to kill Stephanie, Steve beats Stephanie to death and then removes her skull and spinal cord. After the murder is complete, Steve awakens within the virtual reality simulator. Steve, hitchhiking, brutally murders the driver. Steve returns home, where he plays Harvester with his computer. His mother disapproves the game and criticizes violence in video games by saying that people who watch violence commit violence. Steve ridicules his mother's assertions and laughs at her comparison of violent media to "Road Runner cartoons."

If the player chooses to spare Stephanie's life, the Sergeant at Arms expresses disappointment. Steve says that he'd rather die than become a serial killer, to which the Sergeant at Arms responds that he should enjoy his life "such as it is". Steve marries Stephanie in a ceremony officiated by the Sergeant at Arms and the two have a child together. Their graves are then shown, followed by the death of their bodies in real life as their virtual lives only lasted a few minutes.