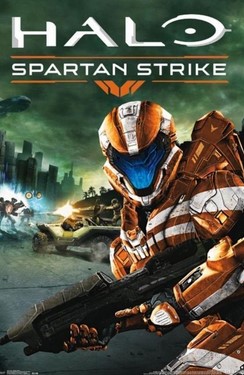 Halo: Spartan Strike is a twin-stick shooter video game set in the military science fiction Halo universe. The successor to Halo: Spartan Assault, the game was developed by 343 Industries and Vanguard Games. It was released for iOS, Windows, and Windows Phone on April 16, 2015. During gameplay, players assume the role of human supersoldiers known as Spartans in a series of war games simulating fictional historical events. Players are able to use all-new weapons, such as the Suppressor, Scatter Shot, Incineration Cannon, and Binary Rifle, as well as new armor abilities, such as the Bubble Shield, Airstrike, Proximity Mine, Teleport, and Shock Chain in the battlefield.

Halo: Spartan Strike takes place after the events of Halo 4. The player character is a Spartan IV super soldier that leads UNSC forces against the Covenant enemies within a combat simulation set during the events of Halo 2 on New Mombasa, much like in Halo 3: ODST. After the first campaign, the player goes to Gamma Halo to fight against a splinter faction of the former Covenant and Promethean set after the events of Halo 4. The player tries to stop the splinter faction from activating a device known as the conduit, but they fail, able to seize the device. Then the player takes the Conduit to a city being attacked by Prometheans and stops the battle.

All games from the serie "Halo"