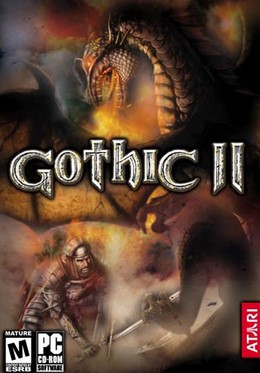 
Gothic II is a role-playing video game and the sequel to Gothic, by the German developer Piranha Bytes. It was first released on November 29, 2002 in Germany, and in North America almost one year later on October 28, 2003. The game was published by JoWooD Productions and Atari, Inc.

Gothic II was a commercial success in Germany, and became JoWood's biggest hit at the time of its release. By 2004, it had sold over 300,000 units when combined with its expansion pack, Night of the Raven. Sales of Gothic II alone ultimately surpassed 400,000 units by 2007, following its re-release as a budget title in Germany.

The Nameless Hero is instructed by Xardas on the new danger, an army of evil that has gathered in the mine valley, led by dragons. Xardas sends the Hero to Lord Hagen, leader of the paladins, to retrieve the Eye of Innos, an artifact which makes it possible to speak with the dragons and learn more about their motivation.

The Nameless Hero starts to the City of Khorinis and after he found a way to enter the city, he learns he has to join one of the factions – the militia, the fire mages or the mercenaries – to be permitted entrance to Lord Hagen. When finally meeting the head of the paladins, the Nameless Hero is first sent into the mine valley, which is now overrun by Orcs, to bring back evidence of the dragons. In the castle, the former old camp, Garond heads the mission of the paladins. He also knows about the dragons, since the castle has already been attacked by them, but is only willing to write a notice on it for Lord Hagen, after the Nameless Hero has gathered information on the status in the mines. By the time the Hero exits the valley with the note about the dragons, the evil forces have become aware of his quest. Seekers are spread throughout the isle, with the goal to kill him.

Presented with the note Lord Hagen is willing to give the Eye of Innos to the Hero and sends him to the monastery of the fire mages to retrieve it. But shortly before the Hero arrives there, the eye was stolen. The Hero chases after the thief, but just arrives in time to witness Seekers destroy the Eye of Innos. A smith can repair the amulet, but for the magical power to be restored, a ritual with high mages representing the three gods is necessary. Vatras, the water mage, prepares the ritual and represents Adanos. With former fire mage Xardas representing Beliar, Pyrokar, head of the fire mages, joins the ritual reluctantly to represent Innos.

The mages manage to restore the power of the Eye of Innos and so the Hero can head back to the valley to destroy the four dragons that live there. After all of the dragons are killed, the Hero travels to Xardas' tower to report to him, but the mage is gone. The Hero is given a note from Xardas by Lester, telling him he was to find more information in the fire mages' monastery, in the book 'The Halls of Irdorath'.

The book contains a sea map, showing the way to the isle Irdorath, one of the ancient temples of Beliar that once disappeared. The hero assembles a crew and gets a ship and a captain for that ship to sail to Irdorath and confront the leader of the dragons, and avatar of Beliar – the undead dragon. After the hero slays the dragon, Xardas teleports into the cave and absorbs its soul, making him an avatar of Beliar. After the hero returns to the ship, Xardas appears and tells him that they will see each other again. The game ends with the ship sailing into the distance toward Myrtana.

All games from the serie "Gothic"