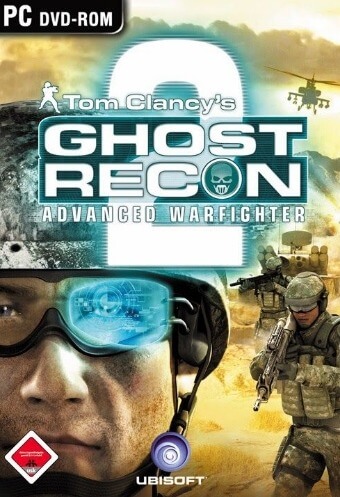 The game takes place in 2014, immediately after the events of Tom Clancy's Ghost Recon Advanced Warfighter (GRAW), just south of the Mexico-United States border, and deals with the conflict between a Mexican rebel group, Mexican loyalists, and the U.S. Army for a time span of 72 hours. A wide array of location types are included, featuring mountains, small towns, urban environments, and a large hydro-electric dam just north of the border.

Much of the gameplay remains the same as it did for GRAW - emphasis in GRAW 2 is on the player doing the bulk of the fighting as Scott Mitchell, while relying on tactical combat instead of arcade run-and-gunning to overcome opponents. Like before, weapons featured in the game are either based on actual models (such as the FN SCAR) or are hypothetical prototypes, with the player able to command friendly units assigned to help them, from their own squad, to drones, tanks and aircraft. Like its predecessor, GRAW 2 features two different versions; while both the Xbox 360 and Playstation 3 versions are essentially the same title, and the Microsoft Windows version features many differences to these, both maintain the same story. In addition, both games feature a new and improved gameplay element - Crosscom 2.0 - a few new weapons (including sub-machine guns for secondary weapons), the ability to have a medic in the squad when commanding a squad, and new friendly units to control, including a two-man squad of Loyalist troops, the MULE Drone, a Little Bird attack helicopter, and Far Support (Airstrikes for Xbox 360/Playstation 3, Mortar/Artillery Support for Microsoft Windows). Much of the gameplay plays out differently to that of the console iterations, and more similarly to the original Tom Clancy's Ghost Recon, but remains largely the same to the Microsoft Windows version of GRAW, in that players play in a first-person perspective, must micro-manage team mates with greater use of squad tactics, and have more situation awareness of enemy activity. Developed by Grin and built on their proprietary engine called "Diesel 2.0", only a few in-game assets such as voice-overs and Cross-Com and Narcom videos remain the same. While some of the missions featured are similar in objective structure to those of the console version, they play out in a completely different manner.

Despite the downfall of Carlos Ontiveros and his coup in Mexico City, rebellion across Mexico continues unabated, spreading civil unrest across the country and into other Latin American countries, including Colombia, Honduras and Panama, with the Panama Canal effectively shut down by the rising insurgency in Latin America. Although having only recently returned to the United States, Captain Scott Mitchell is given new orders to return to Mexico with a team of the elite Ghost Recon force, and continue fighting against the rebellion, which recently entered the Mexican state of Chihuahua and the bordering city of Ciudad Juárez. General Joshua Keating, the Ghosts' commander, informs Mitchell that, apart from preventing the rebels from directly assaulting U.S. soil, he must also investigate recent intel that suggests that the new leader of the insurgents, Juan de la Barrera, a man opposed to the signing of the North American Joint Security Agreement (NAJSA) and to American involvement in Latin America, is in possession of a dirty bomb of either nuclear, chemical or biological origin. Keating further adds that due to Congress not wishing to take any military action against the rebels, along with current international treaties between Mexico and the U.S., the Ghosts are legally non-existent across the border and thus cannot be provided much support until America can legally enter the conflict.

Arriving in the mountains outside of Ciudad Juárez, Mitchell begins assisting loyalist Mexican Army soldiers, led by Colonel Jimenez, in punching through rebel defensive lines, eliminating artillery, clearing out a rebel camp, and taking out rebel weapon convoys heading for the city. During the fighting, fresh intel from Keating and Lieutenant Barnes, the Ghost's Intelligence Officer, reveals that de la Barrera somehow came into possession of three stolen Ukrainian Red Star IV nuclear warheads, and plans to combine them with stolen Pakistani-built Kashmira-II missiles, taken from cargo ships in the Panama Canal, in order to strike anywhere in the United States. With this fresh intel deepening the current situation in Juárez, Mitchell continues offering assistance to Jimenez, eventually helping him to secure a heavily defended supermarket. But just as Mitchell's team leaves, disaster strikes when one of the nukes de la Barrera had detonates in the supermarket's basement, killing Jimenez's men just as they were about to search the stronghold, and irradiating the area.

With the nukes now confirmed to be in Juárez, Keating orders Mitchell to link up with some of Jimenez's best men and reach a bull-fighting arena, in order to help safely extract a Mexican journalist who, in exchange for safe passage out of the city to a secure location, agrees to assist the Americans in learning de la Barrera's plans and where he is hiding the other nukes. Whilst the Ghosts are successful in extracting the journalist, matters worsen for them when mercenaries, supporting the rebels in the city, prevent the team from escaping by shooting down Blackhawk 5, their designated transport, and also losing them Mitchell's close friend and the team's runner, Lieutenant Rosen. Despite heavy opposition, the team eventually receive ground extraction from the area, only to be ambushed by the rebels, crashing the transport and killing everyone, except for Mitchell who manages to survive, but loses some of the functions of his Crosscom system. With the assistance of a lone Mexican Loyalist, Mitchell manages to regain contact with Keating, and hooks up with Blackhawk 9 for extraction, new gear, and a patch-fix to his Crosscom. Soon after being extracted, Barnes reveals that the rebels managed to secure Blackhawk 5's crash site before they could, removing both the wreckage and an injured Rosen, in order to manipulate the media and expose America's illegal involvement against the rebellion, thus gaining support for their cause. Keating sends the Ghosts to a heavily secured hacienda to prevent this from happening, whereupon Mitchell and his team successfully destroy the wreckage and recover Rosen.

Shortly after leaving the hacienda, Mitchell receives word from Keating that U.S. President Ballantine and Mexican President Ruiz-Peña finally signed NAJSA, effectively allowing the United States to assist Mexican Loyalist in putting down the insurgency in Juárez and the rest of Mexico. Assisting a second team of Ghosts designated as Bravo Team, U.S. forces and the Ghosts uses the rescued journalist's information to begin tracking down the two missing nukes, yet despite killing de la Barrera in the process, they only manage to retrieve and neutralize one of the remaining nukes. Concerned about where the last nuke went, fresh intelligence reveals that the mercenaries launched an attack on a dam within El Paso, Texas, prompting fears that the nuke will be detonated upon U.S. soil. However, Barnes reveals that the mercenaries' target was actually a highly classified military installation beneath the dam, code-named "Farrallon", that is connected to the United States anti-ballistic missile defence grid. Keating pieces together what de la Barrera was planning - by dropping the grid, he intended to use the stolen missiles to launch the nukes into the United States and any of its major cities, in the hopes it would force them out of Latin America.