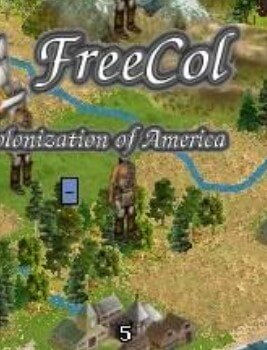 FreeCol is mostly programmed in Java and should thus be platform-independent. In practice, it is known to run on Linux and Windows, as well as Mac OS X (with some limitations).

While remaining faithful to the original in terms of mechanics and gameplay, FreeCol sports a new set of redesigned graphics. Moreover, in addition to the classical Colonization rules, it features an additional ruleset that incorporates ideas that didn't make it to the final version of Meier's game, requests by fans and original concepts like new European players with new national bonuses.

In FreeCol the player leads the colony of a European power from the arrival on the shore of the New World into the future, achieving victory by one of two possible victory conditions: either gaining independence by declaring independence and subsequently defeating the dispatched royal expeditionary force or by defeating the colonies of all the competing European powers by the year 1600. To be allowed to declare independence, at least 50% of the player's colonists must support independence. This is achieved by producing liberty bells; 200 liberty bells turn one colonist from being a royalist into being a rebel. To be able to defeat the royal expeditionary force the player must train and build a strong enough army of his own.

FreeCol starts in 1492 with two colonists on a caravel on the ocean at the player's disposal. The player is the king's proxy and is supposed to lead the caravel to the shore and found a colony in the New World consisting of multiple settlements. The player gets additional colonists by producing food (200 food units in a settlement generates a new unit), by immigration from Europe, by converting the natives or by capturing unarmed units of competing European colonies.

The player may trade with Europe using various natural resources which are produced in settlements or acquired from trade with natives. In each settlement the player can also build up industrial buildings to convert raw materials into processed goods, which sell for more in Europe, providing a significant economic advance.

In February 2007 FreeCol was SourceForge's Project of the Month. In 2008 Rock, Paper, Shotgun's game journalist Alec Meer had mixed feelings about FreeCol but still called it: "it's an (sic) remarkable accomplishment, and I'm very glad it's out there." and "FreeCol, though, is here right now, it's free, it's stable, it's pretty much feature-complete and unlike its parent it has multiplayer". In 2010 Alec Meer named FreeCol in Rock, Paper, Shotgun as a better alternative when he was confronted with the later commercial remake Civilization IV: Colonization.

FreeCol became a popular freeware title, which was for instance downloaded over 1,900,000 times on SourceForge alone, between January 2002 and April 2017.