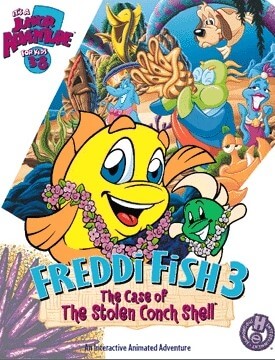 Development for the game began around April, 1996. All puzzles were drafted by the development team on notebooks and minigames for the carnival were sketched. While programming the game, programmers used pseudo-code to keep track of their work.

The characters were designed from basic descriptions with 10 till 30 sketches drawn until a final sketch was approved. The longest process in the character animation was adding bubble trails to their movement.

During the storyboard process it took from 15 to 30 sketches to design each scene in the game. Backgrounds were penciled, inked and hand painted. Some of those backgrounds were inspired by scenery photographs.

To find the right voices for the characters, dozens of actors auditioned for the game.

Freddi and Luther are taking a summer vacation to the Founders' Day Festival in the Hawaiian Sea. As they enter the festival, the Conch Shell which is used to signal the beginning of the Founders' Day Festival has been stolen! To make matters worse, Luther's Uncle Blenny, the "Grand Exalted Keeper of the Conch" is being blamed for this mess! Now Freddi and Luther have to find the three golden pipes that fell out, and look for the real thief. They search and investigate the suspicious characters to find out who really "did it". Once the pipes are found, Old Soggy, Uncle Blenny's dogfish, will smell the scent and find the culprit. Freddi and Luther follow Old Soggy to an Aztec temple in the Sea off the Coast of Mexico.

In the Aztec temple, they spot the thief with a bag and the conch shell outside. Old Soggy swims off to catch the thief. When Luther starts losing control and grabs a jewel, the gate closes and he gets trapped in a cage. Freddi has to get the key to get it open. After Freddi frees Luther and he puts the jewel back in place, the gate opens and the bag drops into the temple. They catch the bag and tell everyone that Uncle Blenny is innocent. Inside the bag is one of six items: a microphone, a foreign language world map, a boxing glove, a cane, a spool of thread, or a toothbrush. One of the suspects is depending on the evidence from the item. When the suspect is chosen, he or she does not believe Freddi and Luther, but Old Soggy bites its tail or back. The culprit confesses and explains the whole situation to everyone.

After the culprit gives Uncle Blenny the conch shell, everyone apologizes to Uncle Blenny for blaming him. He forgives the town and has his title of "Grand Exalted Keeper of the Conch" reinstated. Luther places the pipes in the shell and Uncle Blenny blows out the signal to open the festival and everyone celebrates. The dialogue shows what will happen to the thief as the narrator mentions it, then he says "case closed", meaning the player finished the game.

The game uses exactly the same mechanics as its predecessors. In each playthrough, the puzzles, collectible and usable items, character encounters, locations, minigames, and trivial click spots change to randomly determine which of the six suspects stole the Conch Shell.

(0) Comments on "Freddi Fish 3: The Case of the Stolen Conch Shell Full Version"