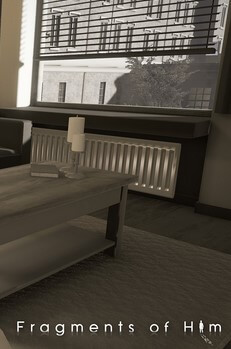 Fragments of Him is an indie video game developed and published by Sassybot and released for PC and Xbox One on 3 May 2016 and 1 June 2016, respectively. The PlayStation 4 version was released on 26 September 2017.

The gameplay in Fragments of Him is based on the life and death of Will, a man who dies early in the game. The player controls four characters throughout the game; Will, his ex-girlfriend, his boyfriend at the time when he died, and his grandmother. As the game progresses, it becomes apparent that the story is not only based on Will's life, but also on those of the other characters, and how they cope with his death. The game relies heavily on its narrative which, although the player controls the game in the first-person, is described by the developer as being viewed in a second-person perspective, i.e. where the player is not directly controlling a character but instead indicates what the characters should interact with next.

Both versions of the game received mixed reviews according to the review aggregator site Metacritic. The main problems reviewers had with the game was its repetitiveness and the tediousness of some parts. Reviewers highly praised its narrative, and some reviewers thought that it would work better as a short film, or an audio drama, rather than as a game.

Fragments of Him is a first-person narrative-based video game set around the death of a bisexual man named Will. The player controls four characters, each of whom was connected to Will during his lifetime. The characters consist of: Will, who dies in a car crash early in the game; Sarah, Will's ex-girlfriend; Harry, Will's boyfriend at the time of his death; and Mary, Will's grandmother. The gameplay has the player character walk around the world, with the player triggering snippets of narration by clicking on highlighted objects. When interacting with non-player characters, clicking on them will sometimes result in them disappearing and reappearing in a different location to give the impression of them walking.

As the player progresses through the game, the perspective changes from Will's, to Sarah's, to Mary's and finally to Harry's. Players passively select whether they see Sarah's or Mary's story first through a hidden choice (which room they walk into first early in the game). It becomes apparent that the story is not only based on Will's life, but also those of other characters and how they cope with his death. During Sarah's portrayal she says "Let me set the scene..." and during this part of the game the player clicks on objects that slowly turn the setting into a pub. After a few pieces of dialogue, the player clicks again to make it all disappear. During Harry's section, the player clicks on objects that remind Harry of Will. In some parts of the game, the player clicks on other characters to make them move forward, suggesting the idea of snapshots based on their memories. Once the player has clicked on enough objects, a meter becomes full and that triggers the next part of the game.

Fragments of Him originally stemmed from an idea developed at a game jam called the Ludum Dare. The game originally had players removing objects while the main character became more and more depressed. Mata Haggis, one of the developers of Fragments of Him, told the Rock, Paper, Shotgun blog that in the final version there would be more mechanics than just removing objects. He said that there would be some choices to be made, and that the story would branch off a little from the choices. The prototype of the game focused only on the boyfriend, while the full version was to include four different character perspectives. He described the gameplay style as a mix of Heavy Rain and Gone Home. Haggis told Nathan Grayson of the Kotaku blog that many of the objects in the game, such as hotels and parks, were based on his real-life experiences of when he lost a friend.

The game was released on the web gaming portal Kongregate in 2013. In December 2013, the game received funding from Mediafonds, a Dutch organisation. During the 2015 GaymerX in San Jose, California, the video game was demoed. About three years after the release of the original prototype, the full game, which was developed and published by Sassybot, a three-man indie game studio in the Netherlands, was released on 3 May 2016 for Microsoft Windows and 1 June 2016 for Xbox One, with the PlayStation 4 version released 26 September 2017. The developers tested and demoed the game during the 2016 Game Developers Conference and said that they experienced people crying while playing the game at their booth and that this was the reaction for which they had hoped.

Fragments of Him System Requirements

(0) Comments on "Fragments of Him Full Version"