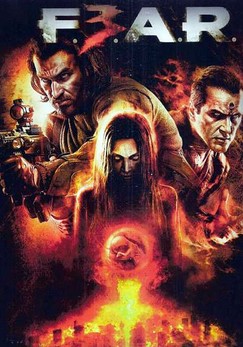 F.E.A.R. 3 (stylized as F.3.A.R.) is a first-person shooter horror video game developed by Day 1 Studios for Microsoft Windows, PlayStation 3 and Xbox 360. It is the sequel to F.E.A.R. 2: Project Origin, and the third installment of the F.E.A.R. series. It was announced on April 8, 2010, and was stated to include John Carpenter helping on the cinematics as well as writer Steve Niles. It is also the only F.E.A.R. game to have offline multiplayer, and co-op.

Players control their characters from a first-person perspective. The player can carry two weapons at a time, and replenish ammo picked up from dead soldiers and weapon crates. The series' cover system uses a "peeking" rather than a "tilting" mechanic, wherein players peer and fire around the edges of their cover. Damage displays as a red vignette overlay. When the screen fills, the character dies. In cooperative and multiplayer modes, the player enters a "Final Stand" on their death, which lets teammates try to revive the downed player.

In the Campaign, the player controls either the Point Man or Paxton Fettel. As the Point Man, the player can use weapons, throw grenades, etc. Unlike most characters, the player can use the Point Man's slow motion ability to slow down time, allowing the player to shoot targets with accuracy. As Fettel, the player cannot use any conventional weapons by default; however, they can use Fettel's psychic powers and telekinesis to suspend and throw objects, possess enemy soldiers, crush suspended enemies, and more. In addition to these abilities, the player also has access to the abilities and weapons of any character Fettel possesses, such as Cultists and Phase Commanders. In co-op mode, Fettel can also use the Shield ability to briefly protect the Point Man. Both characters' abilities are gauged by a meter in the reticle, which depletes during use. Both characters' gauges slowly refills when not in use; Fettel, meanwhile, must collect Souls to replenish his Possession Meter. Players have the ability to access and control Armacham technology, such as mech suits. Also, the game has both online and offline co-operative play.

The game's campaign mode is split into eight "Intervals" that can be played in either single-player or co-op. In single-player, when the player completes an Interval as the Point Man, they will unlock the ability to play as Fettel for that Interval. While playing alone or with a friend, the player can complete challenges to raise their rank. Perks include increases to the slow motion and possession meters and new melee attacks.

Nine months after the events of both games, the Point Man has been captured by Armacham soldiers and interrogated at a prison in Brazil. Paxton Fettel (Peter Lurie), now a "Spectre", interrupts the interrogation and helps free the Point Man. The two form an uneasy alliance and escape the prison through the slums. During their escape, the brothers discover that they — and their tortured mother, Alma Wade (Alésia Glidewell) — are being hunted by "the Creep", a monster unintentionally formed from the cruel memories of Harlan Wade.

Hijacking a helicopter, the Point Man and Fettel return to Fairport to regroup with F.E.A.R. operative Jin Sun-Kwon (Kim Mai Guest). Upon arriving, they discover that most of Fairport's surviving population have been either driven insane by the paranormal activity or executed by Armacham personnel. Despite their differing goals, the brothers successfully meet up with Jin, who plays recorded video footage of Sgt. Michael Becket (Robin Atkin Downes), who claims to have been raped by Alma and is slated by Armacham for transport.

Amid growing distrust, the brothers assault the local airport to intercept Becket, killing the remnants of the Armacham personnel. In an attempt to gain info from Becket, Fettel possesses him and reveals that Alma is indeed pregnant by Becket, with the increasing paranormal activity a result of her contractions. Becket realizes the Point Man's identity before exploding from Fettel's possession. The brothers head to the old Project Origin facility, where Harlan Wade originally developed the prototypes. There, the brothers start destroying items associated with memories of their childhood past to weaken the Creep.

After destroying a monstrous apparition of the Creep, the brothers finally reunite with Alma, whose body has changed drastically due to her pregnancy. The Point Man aims his pistol at Alma's belly, where her third child resides, and Fettel angrily asks him if he is willing to throw his own blood away for orders. As they set themselves at each other's throats, one of two endings occur, depending on multiple factors (such as whether the player has played as the Point Man or Fettel, or in co-op, who has made the most points in 5 different sections of the game's combat.)