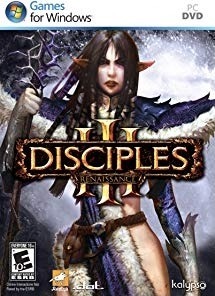 Disciples III: Renaissance is a turn-based strategy video game. The game was developed by .dat and published by Akella and Kalypso Media. The project was in development since the summer of 2005.

The player assumes the role of one of the lords of Nevendaar. This new episode contains three playable races, 'The Empire', 'The Legions of the Damned' and the 'Elven Alliance', with the remaining factions making an addition in planned expansions. The battle system is completely different from that of previous Disciples games. Units are able to move around the battlefield and make use of terrain for fortifications. The player's hero is highly customizable. His abilities as well as his armor and weapons can be changed. All of the equipment changes are noticeable on the actual character model.

The Highfather has turned away from the land of Nevendaar and its inhabitants. His mind is occupied with the coming fate of his world. During this time, a star falls on the border of the Empire and is seen as a sign by the people. Wise men and prophets attempt to solve its mystery, while humans, elves, and demons send their own heroes to find it. Bethrezen above all others wishes to possess the heavenly messenger and use its power as his own.

Thus begins the journey of the mysterious messenger from the heavens named Inoele. She becomes a symbol of hope for many inhabitants of Nevendaar. While traveling the world with representatives of three ancient races, Inoele begins to experience emotions previously unknown to her. Her soul begins to thaw, and in her heart grows love for the strange, turbulent, but also beautiful world of Nevendaar.

The game received more "mixed" reviews than the first two original Disciples games according to the review aggregation website Metacritic. Game Revolution originally gave it an F, but due to the reports of the game crashing that were proven to be false, the grading has since been raised to a D.

All games from the serie "Disciples"