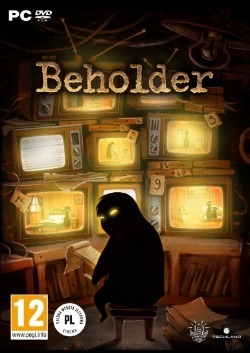 Beholder is a video game about a life in a totalitarian State. The game was developed by Warm Lamp Games and published by Alawar Entertainment.

Beholder was released on Steam on November 9, 2016 and supports Windows, macOS, Linux, Android, and iOS.

The main character – Carl – is a government-installed landlord in a totalitarian State. The State appoints Carl to spy on the tenants. The primary task is to covertly watch the tenants and eavesdrop on their conversations. A player can bug apartments while tenants are away, search their belongings for whatever can threaten the authority of the State, and profile them. The State requires a player to report anyone capable of violating the laws or plotting subversive activities against the Government to the authorities.

The game offers a player a chance to either follow the commands of the Government or to side with the people who suffer from the oppressive directives.

Each game character has their own personality, circumstances, and issues. Every decision that a player makes affects the way the story unfolds. The game has multiple endings each of them being a sum of the decisions made by a player.

Beholder has been nominated and won several conference awards: