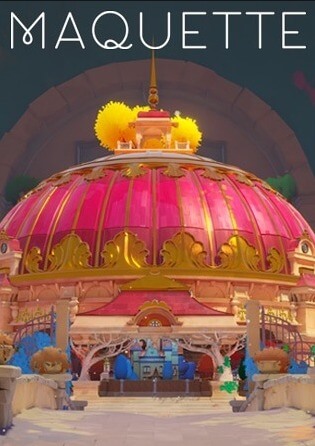 Maquette is a puzzle-adventure video game developed by Graceful Decay and published by Annapurna Interactive. The game takes place in a recursive world where every action on a table is recreated in the larger area outside. The game was released on March 2, 2021 for PlayStation 4, PlayStation 5, and Microsoft Windows.

Just one look at last year’s mind-bending reveal trailer for Maquette and I was enthralled. Its recursive twist on a first-person puzzler is immediately exciting – and that’s saying something for a genre that’s seen portal guns, non-euclidian mazes, forced perspective wizardry, and plenty of other oddball ideas.

But while Maquette has some undeniably clever tricks up its sleeve and is downright stunning to look at throughout, this brief story doesn’t ever really manage to surpass that initial sense of wonder.

Maquette follows a person revisiting their memories of a past relationship, although it does so in fantastical, metaphorical environments through text written on the walls and the occasional cutesy conversation voiced by actual Hollywood couple Bryce Dallas Howard and Seth Gabel. All the while you’ll progress by solving mostly unrelated puzzles using Maquette’s big hook: a recursive world wrapped within infinite identical versions of itself.

In the center of each chapter’s contained puzzle area is a little model (a maquette, if you will) of the terrain around you. Drop an item – like a key or a bridge – into the model and a to-scale version will appear in the same spot behind you, only much larger – alternatively, pick something small out of the model and you’ll suddenly have a tiny version to use in your regular-sized world.

It’s a phenomenally clever concept, and one that’s an absolute joy to mess around with when you’re first getting your bearings.

Part of that immediate appeal is thanks to how jaw-droppingly gorgeous Maquette can be. Its use of vibrant colors and ornate, warped architecture is some of the most beautiful I’ve seen in any puzzle game.

Those impressive aesthetics also extend into its otherworldly particle effects as objects phase in or out of place, as well as its top-notch audio design. Dropping a key into the model will make tiny jingling sounds as it bounces around, and that’s paired with deep, metallic clanks behind you from its larger counterpart.

Walking through an abstract representation of a memory will be accompanied by the realistic bustle and sound effects of the actual place.

But while its environments are stunning to both look at and listen to, I also found them oddly inert. There’s essentially nothing to interact with beyond the extremely limited set of items meant for solving puzzles, and it never felt rewarding to go off the beaten path or look around at stuff unrelated to the singular task at hand.

The most glaring example of this is when you visit the memory of a county fair, which is full of booths with ring toss games, target shooting, and even a giant ferris wheel… all of which are immovable props you’re just meant to smile at and walk past.

That’s not the biggest letdown ever, but it does undercut the life that’s been imbued into each area and makes the act of solving puzzles and interacting with this world feel almost entirely disjointed from the story being told.

Thankfully the puzzles themselves can be very entertaining to solve, if not as exciting as I’d hoped Maquette’s recursive concept could be. There’s lots of tricky little solutions to find that I won’t spoil here, but I especially loved moments like the first time you leave your own “model” world and end up in the giant version of the one outside it (though Maquette could seriously use a sprint button to reduce the slow movement of those sections).

Later chapters also bend the formula in interesting ways that, while generally slightly less successful than the central model idea, do offer some neat twists on its own setup.

Maquette received mostly positive reviews from critics, who praised its story, but criticized its simplistic puzzles. The game has a Metacritic score of 66 on PC, and 72 on PlayStation 5.