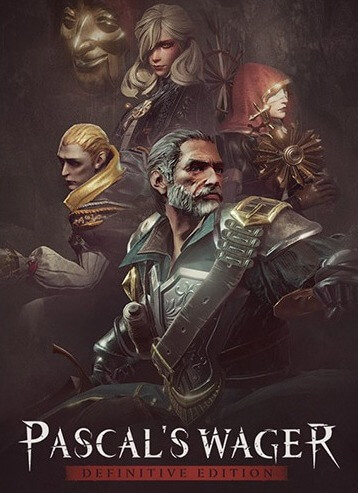 Pascal's Wager: Definitive Edition is a challenging action role playing game set in a world of dark fantasy. Step into the shoes of Couriers, as they discover the tale behind the mysterious Dark Mist.

A World Without Light

The Colossus, mysterious creatures that dispelled the Dark Mist that once engulfed the land of Solas, has fallen. As Couriers, you will explore various handcrafted locales in this intriguing world full of secrets, hidden mysteries, and stories. The veiled truth of Solas awaits your discovery...

Master five unique, powerful, and versatile characters each with their own distinctive combat styles for a rich and incredibly challenging experience. The dark forces you face are relentless and cunning, the bosses will put your planning, reflexes, and determination to the ultimate test.

Humanity's Story in the Darkness

Centuries ago, the sun sank into the sea, leading to the Dark Mist enveloping the lands. At the same time, great, towering beings began to appear. These were the Colossus. They brought light to the areas surrounding them and in turn, humanity found its last and only refuge.

Thousands of years after the Colossi appeared, a mysterious illness beset these creatures of the light and they began to fall...

Following the trail of the falling Colossi, Terrence the Courier and his companions embark on an arduous journey. They will encounter figures benevolent and evil, seal or witness their fate, and unveil the truth behind the dark world.

The wages of sin

As you can see, there’s quite a lot to Pascal’s Wager. There aren’t a great many levels, though. The story can likely be beaten in as little as 10  hours, but that’s if you rush. Completing the game thoroughly and along with the two major DLC offerings will likely take most players closer to 20 hours.

The level design has a substantial amount of quality, and the game has a decent-sized bestiary that’s well placed and interesting to fight. The combat itself is similarly up to scratch, as it’s responsive and snappy, even if the damage balance felt somewhat wonky to me occasionally.

Difficulty wise, Pascal’s Wager is par for the course. It’s challenging without indulging in some of the bullshit of which other entries in the sub-genre are so fond. Unlike practically all of those, though, this one has two options that allow players to mitigate its difficulty. The first is an egg that can be obtained in a shrine during the game’s first level.

It reduces enemy damage by 50%, although it doesn’t tell you this. I grabbed the egg not knowing what it was, and then wondered why the enemy damage was so low. But it can be returned by ringing any of the game’s bells and journeying back to the map that houses the spot where you acquire it.

The other option is to switch the game to casual mode. This cannot be turned off, but will be welcome to many, especially as the damage-reduction egg doesn’t appear in Pascal’s Wager‘s new game plus. Casual mode reduces enemy damage and health and will make for a much easier time.

As the game is a Souls-like, the toughest encounters are naturally the boss fights. These vary a bit. Some are rather interesting and enjoyable, while others can be tedious slogs. One boss, a giant immobile creature that routinely dropping poison, was such a pain that I elected to go get the defense egg back instead of butting my head against it.

I could have beaten it normally, but I just didn’t want to due to how unenjoyable I found the fight. Also, one of the DLC bosses’ defense is abnormally high, as I barely did any damage to him even though I’d been consistently leveling up by killing damn near everything in my path.

Another interesting feature of Pascal’s Wager is that bosses drain sanity more than regular enemies. When your sanity meter runs out during most boss fights, the boss gets a newer, tougher form. You can chug sanity potions to stop this from happening, but the game wants you to fight them, as the super forms drop items you need to get the game’s true ending.