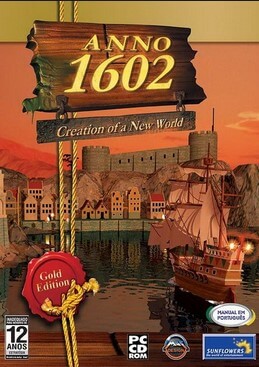 Anno 1602: Creation of a New World,a entitled 1602 A.D. in North America, is a 1998 construction and management video game developed by Max Design and published by Sunflowers Interactive. Set in the early modern period, it requires the player to build colonies on small islands and manage resources, exploration, diplomacy and trade. The game design is noteworthy for its attempt to implement a 'progressive' artificial intelligence, meaning that the pace of the game changes in response to how quickly players act.

Anno 1602 was a commercial blockbuster that attracted buyers outside the usual demographic of German computer games, including a significant percentage of female customers. It was the German market's best-selling computer game of 1998, and remained the region's highest seller of all time by 2003, with over 1.7 million units sold in German-speaking countries. The game was less successful in international markets, but ultimately sold above 2.7 million copies worldwide by 2004. Anno 1602 began the Anno series, which led to the sequels Anno 1503, Anno 1701, Anno 1404, Anno 2070, Anno 2205 and Anno 1800.

Anno 1602 aims to be a mix of simulation and strategy gaming, giving players the chance to create a realistic and lively world, modeling it to their liking. The ultimate goal of the game is to discover chains of islands, settle them, develop on them, and then trade with other players. Players can also trade with their own colonies, and various neutral CPU controlled players such as native tribesmen. Even though the game focuses heavily on an economic standpoint, on various occasions the player will be forced (or will bring it upon others) to defend their islands against possible enemies.

Anno 1602 is a colony building and trading simulation. The player controls an unnamed European nation in 1602 AD that is looking to expand their power into the New World. As the game starts, the player will need to find a nearby island, colonize it, and start building up an economy. The US release contains all 6 scenarios (in addition to the tutorial and training game) that were included in the original European release, as well as 9 new scenarios, along with a "free play role".

In Anno 1602, the player can choose to play out one of the game's many scenarios or engage in a free form game. The game also features online and network play with up to 4 other players simultaneously. Because the network play is less sophisticated than that of modern games, lags and disconnections often occur. Despite this, Anno 1602 is still occasionally played by small groups of LAN PC gamers, or by players over the internet. The game is also playable via null modem connection.