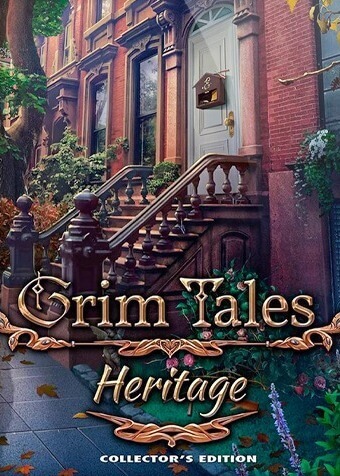 Anna Gray’s sister-in-law Maureen Black reached out to you for help when she woke up one day and saw newspaper headlines depicting her own death! With the help of your daughter Alice Gray, you need to travel through time and stop a dangerous criminal from the future in Grim Tales: Heritage.

With nineteen games in, the Grim Tales family saga unavoidably starts to get old. The drama becomes less interesting and the story development is all too predictable. While in Grim Tales: Heritage, Richard, who was a constant in all the recent sequels, is not present – the time-traveling aspect still remains.

Most fans of this best-selling hidden object series will probably still enjoy interacting with familiar characters, but for players who are not incredibly invested in the shenanigans of the Gray family, there is simply nothing much of note in this game.

Production wise, Grim Tales: Heritage is super solid. However, it is no match to many of Elephant Games‘ previous works. The graphics are sophisticated as usual, with beautiful details and sharp quality. It is only that the animations and the cutscenes look a little rough and unfinished as if the developer completed them as an afterthought.

Grim Tales: Heritage follows the HOPA formula to a T. The gameplay lacks innovation and challenge – hidden object fans can probably complete this game in their sleep. Luckily, the hidden object scenes come in a variety of formats and the puzzles offer some nice twists, so at least the game is not devoid of all the fun.

As expected, Grim Tales: Heritage is offered as a Collector’s Edition, which comes with all the standard features and nothing more. The bonus chapter is around 45-minute long and brings the total length of the game to slightly over four hours.

Other extras include a bonus chapter, a strategy guide, wallpapers, screensavers, soundtracks, achievements, collectibles, morphing objects, a jigsaw puzzle, plus an Archives with replayable hidden object scenes and replayable mini-games.

Your sister-in-law Maureen has received a newspaper clipping from the future, one that describes her own death! With your father Richard out of town, you and your daughter Alice rush to her aid.

It seems her charitable nature has landed Maureen on someone's bad side, but who wants her dead and why? Can you travel into the future and stop a dangerous criminal from destroying Maureen's good work and her life? Find out in this gripping Hidden-Object Puzzle adventure!