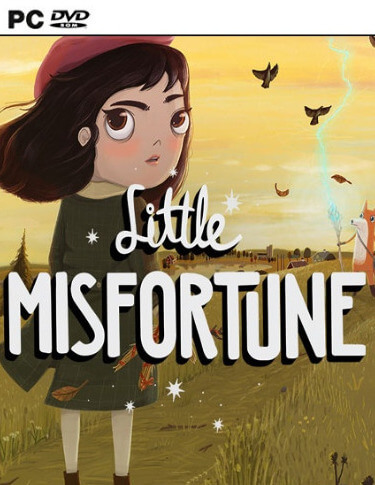 
Little Misfortune is a 2019 dark fantasy adventure video game developed and published by the independent Swedish studio Killmonday games. Set in the same universe as Fran Bow, the game revolves around the titular character Misfortune, who, guided by a voice in her head, seeks the prize of eternal happiness for her mother.

Set in a 2.5D perspective, the player may only move forward or backwards. At certain points in the game the player has to make choices for Misfortune, which may trigger special animated cutscenes. The game will also prompt the player to guide Misfortune's hand to perform certain actions or play minigames, such as fixing a broken vase or playing Whac-A-Mole.

Set in 1993note , 8-year-old Misfortune Ramirez Hernandez lives alone with her parents in the outskirts of the fictional town of Openfields, Sweden.note  The narrator announces that today is the day that Misfortune will die but is surprised when Misfortune says that she can hear him. The voice invites Misfortune to play a game where she will make choices, and that "there is no right or wrong, only consequences." When she beats the game, she will be rewarded with the prize of eternal happiness. Misfortune accepts, and the voice tells her that her first mission is to leave the house. Following his commands, Misfortune is guided through the streets of Openfields, encountering an anthropomorphic fox several times whom the narrator warns her against, and who flees when Misfortune gets too close. Pursuing the fox, Misfortune discovers a book that explains the narrator as an other-dimensional being named "Morgo". The fox is evidently a "protector" who strives to protect children from Morgo but is forbidden to interact with them directly. Escaping Morgo, Misfortune finds herself in her backyard, seeing her own corpse having been run over by a car. The fox leads her through a portal where she encounters death, who tells her that they had been expecting her.

By the end of 2015, Killmonday had completed their first game, Fran Bow. it had been greenlit and was to be released on Steam. It had taken much more time than anticipated and Killmonday Games were out of money. The sales of the game were crucial for them to be able to continue developing. After the success of Fran Bow Killmonday started work on their then "secret game", which would later become Little Misfortune.

On the 13th of July 2018, Killmonday announced the title of their new game. In the following months updates on the progress of the game were uploaded to their YouTube channel, by the time of the release they had uploaded 26 weekly updates. On the 2nd of September Killmonday announced that the game would be released in just a little under three weeks, the 18th of September 2019. The day before release it was announced that owners of Fran Bow would receive a 10% discount on Little Misfortune.

Little Misfortune received mixed reviews from critics, who praised the game's art-style and thematic aspects but criticised the game's lack of gameplay, mishandling of certain themes such as the naivety of children, and relatively short length. On Metacritic the game has a score of 57 out of 100, indicating "mixed or average reviews".

CD-Action gave the game a 45/100, writing "The story made me uneasy not because I thought: ‘those are the kind of things that shouldn’t be said out loud’ but because I thought: it’s unsettling how poorly it is written, how badly they depicted a child’s naivety and how everything is just too over the top."

Rock, Paper, Shotgun gave the game a mixed review, saying "some topics, like abuse, underpin the entire narrative and broadly work to give it a grounding in true unpleasantness. But others, like suicide, feel tossed in for shock value before never being addressed again. That feeling isn’t helped by the tonal mismatch that places these adult fears alongside much more juvenile humour. Jamming a poop joke after an instance of animal death does little but ensure that they trip one another up, where landing one on its feet alone was already tricky."

Kotaku gave the game a more positive review, saying "While Little Misfortune's adventure isn't long (it took me about 2.5 hours to emerge from the other side), it is very meaningful. Misfortune is a bundle of pure joy, and she's a delight to spend time with, even if her adventures come to an abrupt end. While Misfortune breezes and bluffs her way past the darker parts of her story, including a journey through a racy hamster nightclub, players will be all too aware of the sinister world that she dances in."

Adventure Gamers gave the game 3.5 out of 5 praising the games voice acting and story, while criticizing lack of interactivity and moderation in "over-the-top awfulness".

GamersPack gave the game a positive review saying "The game might be a little light on challenges or traditional gameplay, but it’s full of (dark) humor and heart. Little Misfortune continues along the same grim path Killmonday Games started on with Fran Bow, so if you’re into the mix of the cute and the macabre, this one is for you."

Touché: The Adventures of the Fifth Musketeer
hit
upd
new