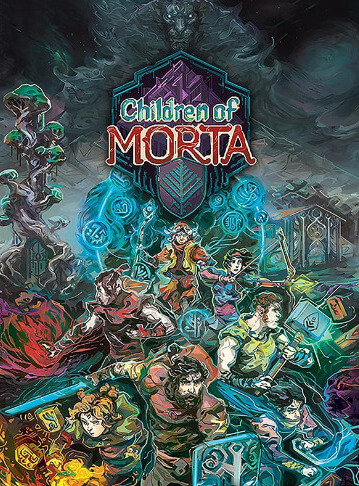 
Children of Morta is an action role-playing video game with roguelike elements, released in September 2019. Developed by American studio Dead Mage, it follows the story of the Bergson family, custodians of Mount Morta, who must defend it from an evil called the Corruption.

Players take on the role of members of the Bergson family, with additional family members being unlocked as a player progresses through the game. Each family member has their own playstyle and gameplay mechanics, and levels up as they are played, granting improvements to themselves as well as other family members. The player must traverse a number of procedurally generated dungeons within the caverns of Mount Morta to clear them of various enemies and bosses.

Individual runs of the dungeon are bookended with returns to the Bergson family home, which sometimes progress the narrative or allow players to witness additional dialogue. Some parts of the story take place after events happening in the game.

Upon its release, Children of Morta was met with "generally favorable" reviews from critics for Microsoft Windows, with an aggregate score of 82% on Metacritic.