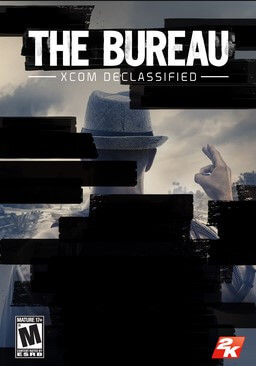 The Bureau: XCOM Declassified is a tactical shooter video game played in third person. It was developed by 2K Marin and published by 2K Games. As the eighth title in the turn-based strategy series X-COM and a narrative prequel to XCOM: Enemy Unknown, the game was released for Microsoft Windows, PlayStation 3 and Xbox 360 in August 2013. Set in late 1962 at the height of the Cold War, the game's premise mainly revolves around The Bureau, the predecessor of the Extraterrestrial Combat Unit (XCOM), as they attempt to repel an alien invasion. As a tactical shooter, players can use the battle focus mode to issue commands to two other agents accompanying the protagonist, William Carter. Players can permanently lose their squad members so they must make good tactical decisions.

The game's development was protracted and troubled. Development began in 2006 after Irrational Games was acquired by Take-Two Interactive. The title then became a collaboration between 2K Marin and 2K Australia, which was later removed from the project due to communication issues between the two studios. The team initially wanted to create a mysterious first-person shooter with fearful alien life forms. The player would be tasked to take photographs of them and research them in a secret government organization. Ultimately, the team decided to focus more on teamwork and tactical elements, which are staples of the X-COM series, and rebranded the game as The Bureau: XCOM Declassified. The Day The Earth Stood Still and X-Files inspired the game's artistic style while The Right Stuff inspired the game's narrative.

Revealed as XCOM in April 2010, the game was meant to be a reboot of the series; the idea was met with mixed reactions from critics and players. It missed several target release windows before release. The Bureau: XCOM Declassified received mixed reviews upon release, with critics praising the game's tactical elements and art style but criticizing the game's artificial intelligence, permadeath system, narrative, and gameplay. Most critics considered the game a disappointing entry into the series. The game debuted as the tenth best-selling retail game in its first week of release in the UK.

The Bureau: XCOM Declassified is a tactical shooter played from a third-person perspective. In the game, the player assumes control of Agent William Carter, a field agent who has to defend the US from a hostile extraterrestrial force known as the Outsiders. The Bureau's headquarters serves as the game's hub space where Carter can interact with other people of interest. Using a dialogue tree, players can select different conversation options to talk to other non-playable characters. Players also recruit agents in the headquarters and choose one of four different classes for them—commando, engineer, recon, and support. Each class has different abilities and weapons. For instance, the commando class specializes in direct offensive abilities and rifles, while the engineer class relies on landmines and automatic turrets. Players also choose the recruit's background from six possible options; each provides a minor perk that enhances the recruit's combat efficiency. Recruits can be further customized with different faces and uniforms. In mission areas, players are accompanied by only two recruited agents; other agents stay at the base or are dispatched to secondary tasks.

To combat the alien enemies, the player accesses a variety of both human and aliens firearms, ranging from pistols and grenades to scatter laser and laser rifle. In order to flank enemies and avoid being shot by them, players can hide behind and switch between cover. Since ammunition is limited, players look for resupply in different ammo stashes or pick up new weapons by exploring each mission area. Players can assign commands to two companions who are controlled by artificial intelligence (AI). By entering the battle focus mode, in which time slows down nearly to a halt, players can instruct the companions to move to different positions, hide behind cover, target an enemy, or use a skill. If a cover is effective, a blue holographic shield is shown, otherwise a red shield is shown. In the console versions, commands are issued via a radial wheel, whereas in the PC version, commands are shown as a flat row of options for players to select. In the battle focus mode, the area of effects and the percentage of success of each attack, and the health status of the squad members, are displayed. Actions can be chained together to create combo attacks though special abilities usually have a cooldown time (abilities cannot be activated for a certain period of time after being used). An agent will become permanently unconscious or die if Carter is unable to revive the agent. Players explore each mission area to find documents and audio recordings that provide insight about the game's world.

Carter and his squad members gain experience points by completing missions and secondary tasks. The experience points allow the player character and their squad members to level up and gain new abilities. New options in the game's branching skill tree would also become available for players to unlock. The upgrade choices are binary—unselected choices are locked forever. Some of these upgrades include alien powers such as cloaking, levitation (which ascends enemies hiding between cover), and pulse wave (which knocks down enemies). Backpacks can be collected to boost the passive perks.

Responding to Director Faulke's summons, William Carter waits in a room at the Groom Range facility where he meets a military officer who informs him that she is to escort him to Faulke to deliver his briefcase. Carter is wary and refuses to go. A black fluid discharges from the officer's eyes, revealing her to be infected; she shoots Carter and opens the case. The case emits a blinding light which incinerates the officer and stuns Carter. Moments later, Carter awakens to find his gunshot wound inexplicably healed and the case destroyed. The base comes under attack. Carter attempts to rescue Faulke as the attackers, identified as the Outsiders by bureau agents whom Carter encounters, easily slaughter the base's garrison. He eventually finds Faulke, but is too late to save the J. Edgar Hoover, CIA director Frost, and General Deems (who became infected and killed the others). Carter escapes the Groom Range facility by tram just as Outsider devices cause the mountain to implode. He stalls the Outsider pursuit with a powerful Elerium bomb and he and Faulke flee on a Skyranger helicopter.