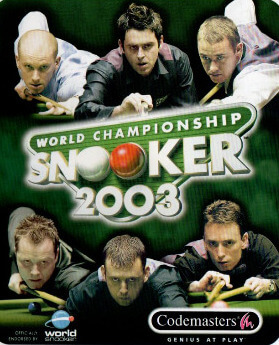 World Championship Snooker 2003 is a sports video game developed by Blade Interactive and published by Codemasters for PlayStation 2, Xbox and Microsoft Windows.

In comparison to earlier titles, the game was not only Snooker specific, and allowed players to eight-ball and nine-ball pool, and a number of minigames including trick shot, in my pocket, and against the clock.

The game was also released with a version specifically designed to play in English pubs and bars. The game involved commentary from both Dennis Taylor and for the first time, John Virgo. John Virgo also lends his name to the unlockable trick shot mode, similar to the one displayed on Big Break.

World Championship Snooker 2003 received "mixed or average" and "generally positive" reviews, according to review aggregator GameRankings. Thunderbolt Games scored the game very highly, at 90%, calling it the "game of the highest standard."

Eurogamer were less impressed with the game, scoring it 7/10, citing "WCS2003 may not look as good as it could do, or top Virtual Pool's still unbeaten control scheme for sheer genius, but it's got lots to do, with an unlockable John Virgo trickshot challenge (which is ace)sic".