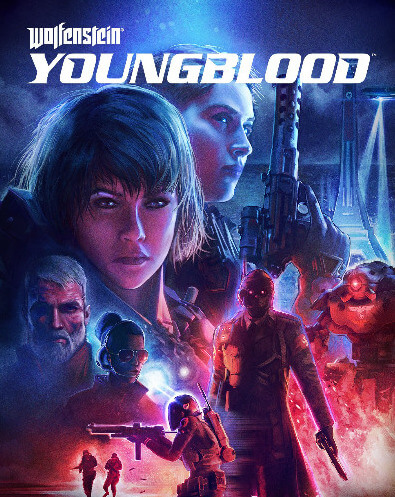 Wolfenstein: Youngblood is a first-person shooter developed by MachineGames and Arkane Studios and published by Bethesda Softworks. A spin-off of the Wolfenstein series, the game was released for Microsoft Windows, Nintendo Switch, PlayStation 4 and Xbox One in July 2019 and Stadia in November 2019 as a launch title. The game received mixed reviews from critics, due to some glitches, performance issues, repetitive side quests, role-playing elements, the main characters, and the game's humor, although the core gunplay, movement, art direction, music and voice-acting were praised.

The player assumes control of either Jessie or Zofia Blazkowicz from a first-person perspective; an optional cooperative multiplayer mode is included. Players can complete the game with another player or with an artificial intelligence substitute. Missions can be completed in a non-linear order, and players can unlock new gear and abilities as they progress in the game.

Twenty years after Wolfenstein II: The New Colossus, America and much of the world is liberated from Nazi control and B.J. Blazkowicz and his wife Anya have raised their twin daughters Jessie and Zofia, teaching them how to defend themselves. In 1980, Blazkowicz mysteriously disappears without a trace. Jessie, Zofia, and their friend Abby, Grace Parker's daughter, discover a hidden room in the attic with a map indicating Blazkowicz traveled to Nazi-occupied Neu-Paris to meet the French Resistance. Believing that American authorities will not follow Blazkowicz to Nazi France, the girls steal an FBI helicopter and a pair of powered armor suits and head for France.

In France, the girls meet Juju, the leader of the Resistance, who confirms that she had met Blazkowicz, but she has no knowledge of his current location. They discover that he is trying to find a way into a secret Nazi installation called Lab X. In order to gain access to Lab X, the girls decide to help the Resistance hack the main computers of the "Brothers", a trio of security towers that hold the keys to Lab X. Upon reviewing the data in the Brothers' computers, Abby realizes that Juju is a Nazi agent and her partner is General Lothar, the disgraced commander of the Nazi forces in Neu-Paris. The girls pretend to drink Juju's drugged wine, and Lothar gloats that with the Brothers under his control, he can commence his plans to start a Fourth Reich without interference from his superiors in Berlin. A struggle ensues, with Lothar and Juju managing to escape while Abby is stabbed in her left eye.

Abby directs Jessie and Zofia to find Lab X. She explains that the Nazi leadership attempted to kill Lothar for disobeying their orders, forcing him into hiding where he eventually infiltrated the French Resistance with Juju. Jessie and Zofia breach Lab X and proceed to its deepest level, where they find Blazkowicz. He tells them that after he killed Hitler in the 1960s, he accidentally activated a doomsday device that will eventually render the Earth uninhabitable. He traveled to Lab X to find a way to stop the doomsday device, where he learned about the existence of multiple alternate dimensions, and glimpsed one where the Nazis lost World War II. He then uses a Da'at Yichud artifact to upgrade Jessie and Zofia's powered armor suits and directs them to go after Lothar. Meanwhile, Lothar retakes his old headquarters and orders his allies in Berlin to stage a coup against the government. Jessie and Zofia confront Juju and Lothar and kill them both.

Bethesda announced the game at Electronic Entertainment Expo 2018. The title was developed by MachineGames, which led the development of the rebooted Wolfenstein series, and Arkane Studios' office in Lyon, which previously handled the development of the Dishonored series. Initially the game was a narrative adventure focusing on only one of the twins. However, during internal testing and feedback phase, the team expanded the scope of the story to include both twins as the game's duo protagonists and added a cooperative multiplayer mode so that two players can complete the game as the twin sisters together. The game's Deluxe Edition includes a Buddy Pass, which can be gifted to a player who does not own a copy of the game. The Buddy Pass enables that player to download and play the game without buying it, on the condition that they play it in the same game session with the player who grants them the pass. Wolfenstein: Youngblood was released for Microsoft Windows (via Steam and Bethesda Store), Nintendo Switch, PlayStation 4 and Xbox One on July 26, 2019. The development of the Switch version was outsourced to Panic Button. Although the Nintendo Switch version will have a standard and a Deluxe Edition retail release, no actual physical game card will be included, and a download code will be offered instead.

Wolfenstein: Youngblood and the simultaneously released Wolfenstein: Cyberpilot were the first games to make use of the "social adequacy clause" introduced by Unterhaltungssoftware Selbstkontrolle (USK; the German software ratings board) in August 2018, which allowed the use of Nazi imagery in video games in relevant scenarios, reviewed on a case-by-case basis. Despite being officially rated by USK, major German retailers, such as MediaMarkt, Saturn, and GameStop, refused to sell the uncensored version, offering only the separately sold German version, which lacks all Nazi imagery and references and features German as the only language option.