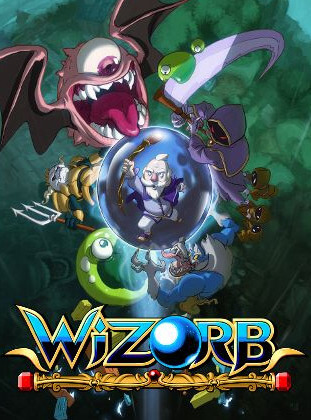 Wizorb is a role-playing video game created and published by the independent developer Tribute Games. The game was released on the Xbox 360 Xbox Live Marketplace on September 29, 2011. The gameplay is a cross between Breakout and a role-playing game. Wizorb was ported to Microsoft Windows, OS X, and Linux. It was released for Microsoft Windows through Steam on March 14, 2012, with added achievements and cloud storage. Upon release, Wizorb saw favorable reviews from critics, with VentureBeat's Jacob Siegal listing it as one of the top 10 independent video games of 2011.

Wizorb is a cross between Breakout and a role-playing game. The core of the game takes place in a Breakout clone where the player can use magic to control the ball and help destroy the bricks and enemies. The RPG elements concern rebuilding a town, restoring its citizens and leadership, and fighting mini-bosses and bosses within the primary block-breaking gameplay.

Wizorb was developed by Tribute Games and first released for the Xbox 360 through the Xbox Live Marketplace's Xbox Live Indie Games section on September 29, 2011. The game is the first title by the independent developer Tribute Games. Destructoid's Jordan Devore noted that high quality Xbox 360 indie games are often ported to the PC, praising, "Wizorb is one such game". A port for Microsoft Windows was released on November 7, 2011, through the digital distribution website GamersGate. The computer version can be controlled by a gamepad, keyboard, or mouse. The entire game can be played using only a mouse, and the developer recommends this method as it "makes Wizorb rely even more on reflexes which feels great and makes the game a tad easier."

Even before the Windows release, the developers were working on porting the game to OS X and Linux. On October 29, 2011, the developers stated they were considering porting the game to a smartphone platform, to which GameSetWatch's Eric Caoili exclaimed, "This thing needs to be on every device ever!" Using the MonoGame programming library, ports were released for OS X and Linux. The Windows version was made available through the Steam digital distribution platform on March 14, 2012.

The game receive favorable reviews from critics, garnering an 81% on review aggregation site Metacritic. The game was rated as one of the top 10 independent video games of 2011 by VentureBeat's Jacob Siegal.