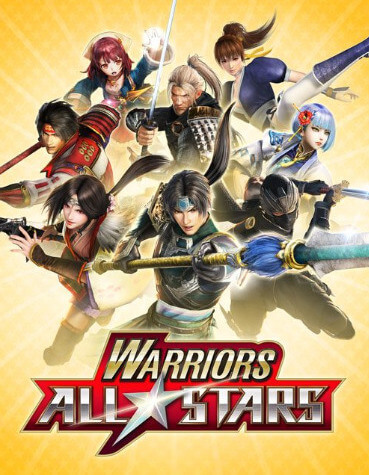 Warriors All-Stars, (or Musou Stars (無双☆スターズ, Musō ☆ Sutāzu) in Japan) is a hack and slash game by Koei Tecmo. It is a crossover based on the long-running Warriors series, featuring an array of cast taken from various titles owned by the company, similar to the Warriors Orochi series. It was released on March 30, 2017 in Japan. The PC version was released on August 29, 2017 in the US and on September 1, 2017 in Europe.

The gameplay is modeled after the hack-and-slash Warriors series, in which the player controls a single character to defeat enemies throughout a stage while trying to achieve a specific goal. In Warriors All-Stars, each player may also select four supporting characters to assist the chosen character; the supporting characters lend additional abilities that may be triggered by holding down R1 and selecting a face button. Certain pairs of characters, when assisting the character at the same time, may combine their attacks for additional effect.

Although the game uses the Warriors Orochi series as its inspiration, the game engine is highly reminiscent of Samurai Warriors: Spirit of Sanada and gameplay is closer to that of Dynasty Warriors 8: Empires. All characters have a similar movepool of a normal attack chain of six attacks, and six charge attacks, as with the Dynasty Warriors series. In addition, effort was made so that each character's moveset remains true to their series of origin (Ryu Hayabusa, Ayane, and Kasumi, who previously appeared in Warriors Orochi 3, have their movesets entirely redone as a result). Samurai Warriors series characters have their normal and hyper attack chain shortened to accommodate the attack system, though they are given a sixth charge attack to compensate; Dynasty Warriors series characters have some of their charge attacks altered either visually or in their function for this game.

As not every character is armed with a weapon, as is traditional in Warriors games, character growth instead focuses on hero cards, which take the place of weapons in this game. Hero cards may be equipped to a corresponding hero, and grant the hero increased abilities. Each character may have up to twenty cards in their inventory, although only one may be equipped to a character at any given time. Unwanted and excess hero cards may be sold for gold between missions or disassembled for materials that may be spent to enhance other hero cards. Gold may also be spent to level up characters, though only to the highest-leveled character currently available to the player.

The stages featured are themed after the series of origin for the various characters, though some stages are taken from Samurai Warriors 4 and Dynasty Warriors 8 series games, either taken as-is or themed to another series' visuals. (This had also occurred with Warriors Orochi 3 series games as well.) Visuals include a Nara-era Japanese garden and medieval European ruins were featured, based on the Toukiden: The Age of Demons and Atelier titles, respectively. Music for the game primarily consists of remixed versions of theme music from the characters' series of origin. Most themes contain two mixes: a "Starlet Mix" that is primarily orchestral in nature, and a "Stars Mix" that is similar, but places greater prominence on rock instruments, as traditional in the Warriors series.

The game story features a scenario that unfolds based on the initial character chosen at the start of the game. The storyline is nonlinear, and may be advanced at a player's own pace. Most missions do not advance the plot, and merely serve as side missions meant to raise a character's skills and abilities, akin to Free Mode in other Warriors games. "Hero Battles" allow additional characters to be unlocked, while "Key Battles" advance the story. The completion of certain Key Battles may prevent the player from participating in other missions, and some Key Battles may require that characters be unlocked through Hero Battles before they may be played. There are 15 total endings in Warriors All-Stars, necessitating multiple play-throughs in order to experience the complete story.

The game is strictly single-player, though the producers have not ruled out a future update that includes multiplayer functionality.

The primary setting of Warriors All-Stars is a kingdom relying on a magical spring to sustain themselves. When the king of the kingdom suddenly dies and the spring begins to wither, the widowed queen and priestess of the spring, Sayo (小夜, voiced by Aya Endo) informs her three charges, her children Tamaki (環, voiced by Yūki Takada) and Shiki (志貴, voiced by Kazuyuki Okitsu), as well as her nephew Setsuna (刹那, voiced by Yukitoshi Kikuchi), that the spring must be restored using the power of otherworldly heroes. When Tamaki attempts to summon the heroes using the last of the spring's magic, the summoning goes awry, and the heroes are scattered throughout the land. Each of the three charges proceed to recruit the various summoned heroes to their cause in a race to restore the fountain and claim the throne for themselves.

The story then turns its focus to a hero selected by the player before the first mission. This hero is generally joined by the other heroes from the same series of origin (characters who are the sole representatives of their series are joined by characters from a second series), who are in turn recruited by one of the three charges for their cause; the second mission introduces both rival claimants to the throne and their respective forces. At this point, the story branches off into three broad campaigns, based on the royal heir that has recruited the hero.