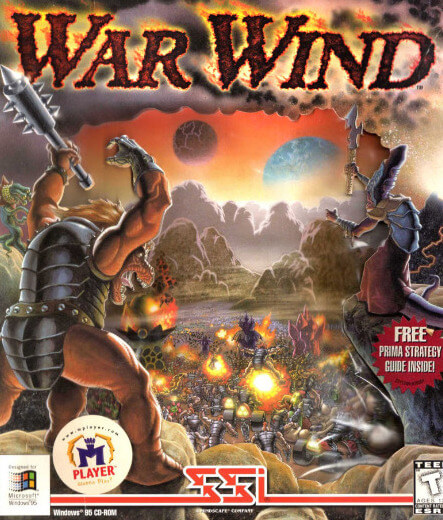 War Wind is a 1996 real-time strategy game in the vein of Warcraft II: Tides of Darkness. It was developed by DreamForge Intertainment and published by Strategic Simulations, Inc. It runs on Microsoft Windows and used DirectX 2.0. A sequel to War Wind, titled War Wind II: Human Onslaught, was released by DreamForge and SSI in 1997. Both games were digitally re-released on GOG.com.

War Wind takes place on the world of Yavaun, where four races have co-existed for millennia. The Tha'Roon are the thinkers, leaders and overlords of the planet. They have dominated the other races on the globe. In particular, the Tha'Roon have enslaved the tree-like Eaggra, forcing them to act as their builders and engineers. The Tha'Roon accomplish this through their bullying and domination of the Obblinox, slow-moving but extremely strong silicon lifeforms specialized in cyborgs. Lastly are the reclusive Shama'Li, monk-like practitioners of magic, who desire to unify the four races.

The basic gameplay is very similar to other real-time strategy games such as the Warcraft series. A game starts with a clan leader, and usually some workers and a token defence force. The player must use these workers to build structures and mine for resources. Some unique features differentiate the game from others in the genre. For example, in order to get any combat unit other than mercenaries, a worker must be trained at a particular type of building. In order to receive a higher level combat unit, a lower-level unit must be promoted at a specific facility. Additionally, units can be individually upgraded in a variety of areas such as speed, strength, resilience, stealth, and vision. The purpose for these micro upgrades is to encourage more strategic conflicts, wherein a player must make the most of small numbers of units instead of building a large force and rushing the opponent.

Another unique aspect of War Wind is stealth. Many units possess the ability to conceal themselves in different ways. "Masked" units do not appear on the opponent's minimap. "Disguised" units appear as friendly workers to an enemy player. "Hidden" units do not appear on the minimap and look translucent on the main map. "Invisible" units appear on neither the opponent's minimap nor their main map.

Stealth is always broken, regardless of level, when a unit attacks or is attacked. It will not be restored unless the unit remains out of combat for a period of time. Additionally, units with vision upgrades have the ability to see through stealth, and clan leaders can see through stealth without vision upgrades. Certain spells, such as the Shama'Li's Seer or vision quest abilities, will reveal stealthed units. An additional level of stealth can be granted through the Tha'Roon spell MindShield.

As with most real-time strategy games, War Wind features a fog of war mechanic. The player can only see within a certain range of their units. Fog of war will conceal any unit completely and also mask any structures built. The fog does not conceal natural land formations, even those that have not been seen yet. There are also trees on the map which prevent units from seeing into them. However, once a unit enters a tree, he can see just as far as he would normally be able to.

War Wind is strongly focused on single-player play. The player can choose one of four campaigns (one for each race). Each campaign has seven battles, and advances the story through cut-scenes and in-game dialog. Each race has a notably different goal.

Each race also has different units, structures they can build and radically different abilities. While this became standard for the genre after StarCraft (released two years later), in 1996 this was something of an innovation. Earlier games (such as Dune II) featured different sides with different attributes, but not to the dramatic extent found in War Wind.

Another innovation for the time is the ability to bring upgraded units from mission to mission. This ability to transfer a modded unit forces players to consider their choices, and put more stock into which modifications are used and keeping that character alive. This is meant to contrast with the typical convention of the genre that a unit can be easily replaced if lost.