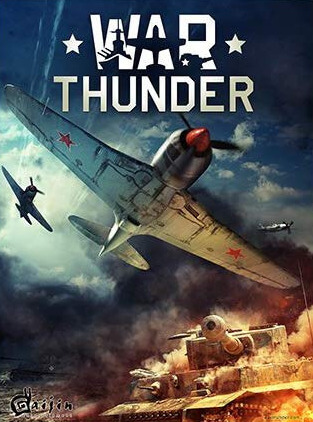 The game is based around combined arms battles on air, land, and sea with vehicles from the interwar period and the Spanish Civil War to the Iraq war and beyond, with an emphasis on World War II. Players can control aircraft, ground vehicles, and warships from a variety of nations including the Soviet Union, Germany, the United Kingdom, Japan, France, Italy, the United States, China, and Sweden.

War Thunder is divided into three main game modes for ground, air, and naval forces. This includes arcade, realistic, and simulator. In ground arcade, air forces are accessible for a short period and are earned via destroying other tanks. For ground realistic, the player can use tanks, planes, and helicopters. In air battles, the battles are strictly air forces without helicopters. For naval battles, the navy can be combined with the air forces. Aircraft are in every mode of rewarded play.

Players can now also play in a cooperative mode defending a position against AI tanks and planes (PVE).

In this mode, the game draws two teams of players (of up to 32 players on each side) with vehicles from different nations of varying combat performance. It is possible to see vehicles of the same type on different teams, and different countries on the player's own team. Damage and physics are greatly simplified (e.g. in very high-speed dives planes do not have their wings ripped off and are still controllable, and ground vehicles receive a boost in engine power), but retain some realism (e.g. bombers are not as maneuverable as fighters). In Arcade, there are mechanics that — while unrealistic — are meant to make the player's experience easier (e.g. aircraft are able to reload midair after running out of ammunition). There is also an indicator indicating where the shell would land and showing whether the shell would penetrate the opponent's vehicles or not. Everyone can see everyone in this game mode.

For aircraft, games are played in either Ground Strike, where in order to win players must destroy all enemy ground units, shoot down all enemy aircraft, and destroy the enemy airfield and bombing points; Domination, which consists of seizing neutral or enemy airfields by touching down on them for about five seconds, causing the enemy team to lose points; or Air Domination, which requires players to have total control over an area of airspace for long enough to capture it. To help simplify aiming, a 'leading marker' appears when an enemy plane is in range. This shows a prediction of where the enemy plane will be by the time the bullets of the smaller caliber weapon arrive if the plane continues its current trajectory.

For ground forces, Domination revolves around the capture of three strategic zones on the map, with Conquest featuring only one. In Break, the two teams must capture a series of points in order, while in Battle, each team has its own base zone and must prevent it from being captured. Similarly to how aircraft have a "leading marker", ground forces have a reactive crosshair that factors the ballistic drop of the vehicle's primary weapon at range. It is also color-coded to indicate whether the vehicle the player is targeting can be penetrated by the ammunition they are using at the range they are sighted for, or whether they are targeting an enemy or allied vehicle.

Previously called Historical Battles, this mode is designed for more advanced players, and offers more realistic physics and damage modeling, while retaining some of the simplistic elements of the interface and controls of Arcade Battles. Once ammunition or armaments are depleted, players can return to their airfield to reload and repair. For the majority of matches in this mode, players are selected to have only collaborating nations on each team, making it possible to recreate real scenarios, such as the Battle of Stalingrad between the Soviet Union and Germany.

In Ground Realistic Battles, players get to use more than one vehicle per game through the use of Spawn Points, which are obtained by destroying enemy vehicles and capturing points. Aircraft and helicopters may also be used. Like the Air Realistic Battles mode, players do not have access to enemy player markers, penetration indicators, or range indicators (except for the separate rangefinder).

In Air Realistic Battles, players do not have the option to respawn. Enemy aircraft receive range markers and nametags within a certain range, which varies depending on the angle and distance to the aircraft. The amount of bombers available to each team is also limited.

Previously called Full Real Battles, Simulator Battles are based on Realistic Battles with further restrictions on the user's interface and controls; only the first-person view in the cockpit and external turret gunner views for aircraft are allowed in flight. Tank players are restricted to the gunner's scope, the driver's port / cabin, and a commander's perspective located above the vehicle. Additionally, aircraft can only be played in Full Real controls (there is no "instructor" to prevent the aircraft stalling and the mouse can only be used to simulate a joystick). Players retain the ability to utilize their aircraft's flaps, trim, and engine(s) in Simulator mode. The heads up display is available to display speed, altitude, heading, engine/throttle settings, oil and water temperatures, and basic vehicle damage status.

Custom battles, available for air, ground, and naval vehicles alike, is a mode allowing for the creation of battles by individual players. The creator of the custom battle can select the map, game mode, and other settings; they can also set a password to restrict who can play.