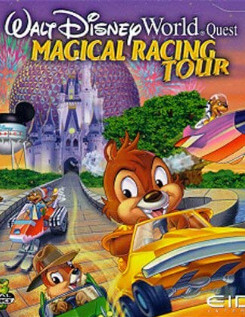 Walt Disney World Quest: Magical Racing Tour is a 2000 go-kart racing video game based on attractions at the Walt Disney World Resort. Players compete in races on tracks inspired by attractions such as the Haunted Mansion, Pirates of the Caribbean, Space Mountain and Big Thunder Mountain Railroad to acquire missing parts for the park's fireworks machine, which was accidentally destroyed by Chip 'n' Dale while they were gathering acorns. The game was developed by Crystal Dynamics and published by Eidos Interactive. The Game Boy Color version was developed by Prolific Publishing.

The game consists of normal kart racing gameplay, racing in three-lap races around tracks inspired by Big Thunder Mountain Railroad, Blizzard Beach, Dinosaur, Rock 'n' Roller Coaster, the Haunted Mansion, the Jungle Cruise, Tomorrowland Speedway, Space Mountain, and Pirates of the Caribbean to win parts for the fireworks machine in the game's story mode. Completing the story will also unlock a track inspired by Splash Mountain. However, on tracks inspired by Test Track, Typhoon Lagoon, and Disney Studios Florida, players must collect thirty coins around the driving areas of these tracks within four minutes in order to complete their events.

With the exceptions of Chip, Dale (both of whom appear in their Rescue Rangers outfits), and Jiminy Cricket, the game's playable characters are original characters made for the game.

The soundtrack features authentic Disney music from the attractions, with the exception of Space Mountain, which features music from the Disneyland version, and Rock 'n' Roller Coaster, which does not feature Aerosmith as the actual attraction does.

The Dreamcast version received "mixed" reviews according to the review aggregation website Metacritic.

Reviewers of IGN and Eurogamer praised the presentation of the PlayStation (IGN) and Dreamcast versions (Eurogamer), and how the developers were able to recreate popular attractions in-game, and the "Disney-esque" charm it has. Both also berated the difficulty (with the CPU racers being so hard to beat), some of the graphics, and the fact that the developers only used a small sound sample from each attraction and looped it, which got annoying quickly.

A reviewer of GameSpot called the Dreamcast version a good entry to the kart racing genre, while also bringing attention to its many similarities to Mario Kart. The amount of detail put into the tracks and the sound were also praised, but the reviewer was disappointed by the game's short play length. Nintendo Power gave the Game Boy Color version a mixed review, nearly three months before its U.S. release date.