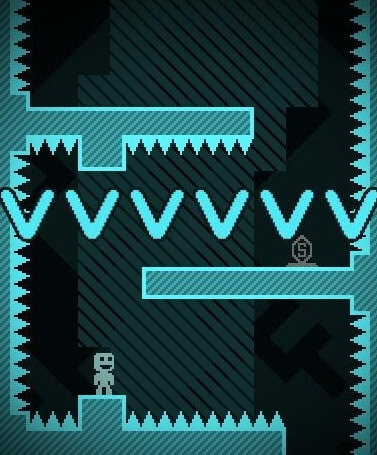 VVVVVV is a 2010 puzzle-platform video game created by Terry Cavanagh. In the game, the player controls Captain Viridian, who must rescue their spacecrew after a teleporter malfunction caused them to be separated in Dimension VVVVVV. The gameplay is characterized by the inability of the player to jump, instead opting on controlling the direction of gravity, causing the player to fall upwards or downwards. The game consists of more than 400 individual rooms, and also supports the creation of user-created levels.

The game was built in Adobe Flash and released on January 11, 2010, for Microsoft Windows and OS X. The game was ported to C++ by Simon Roth in 2011, and released as part of the Humble Indie Bundle #3. The port to C++ allowed the porting of the game to other platforms such as Linux, Pandora, Nintendo 3DS and Nintendo Switch.

Unlike most platforming games, in VVVVVV the player is not able to jump, but instead can reverse the direction of gravity when standing on a surface, causing Captain Viridian to fall either upwards or downwards. This feature was first seen in the 1986 8-bit game Terminus. The player uses this mechanic to traverse the game's environment and avoid various hazards, including stationary spikes and moving enemies.

Later areas introduce new mechanics such as moving floors or rooms which, upon touching one edge of the screen, cause the player character to appear on the other side.

VVVVVV contains eight main levels, including an intro level, four levels which can be accessed in a non-linear sequence, two intermission levels, and one final level, only seen outside Dimension VVVVVV (in a "polar dimension"). These are situated inside a large open world for the player to explore, spanning more than 400 individual rooms. Due to its high level of difficulty, the game world contains many checkpoints, to which the player's character is reset upon death.

The sad elephant, sometimes also called the elephant in the room, is a large elephant with a tear dropping from its eye. It spans four rooms near the Space Station area of Dimension VVVVVV, flickering constantly from color to color. If the player stands near the elephant for a short period of time, it will cause Captain Viridian to become sad. The elephant serves no function to the game, but has served to provoke much discussion about its meaning or symbolism amongst fans of the game. Similarly to many of the enemies in the game, the sad elephant originated in dream journals kept by creator Terry Cavanagh and not from Jet Set Willy as once believed.

The player controls Captain Viridian, who at the outset of VVVVVV must evacuate the spaceship along with the captain's crew, when the ship becomes affected by "dimensional interference". The crew escapes through a teleporter on the ship; however, Captain Viridian becomes separated from the rest of the crew on the other end of the teleporter. Upon returning to the ship, the Captain learns that the ship is trapped in an alternative dimension (referred to as Dimension VVVVVV), and that the ship's crew has been scattered throughout this dimension. The player's goal, as Captain Viridian, is to rescue the missing crew members and find the cause of the dimensional interference.

The gravity-flipping mechanic of VVVVVV is based on an earlier game designed by Cavanagh, entitled Sine Wave Ninja. In an interview with IndieGames.com, Cavanagh said that he was interested in using this idea as a core concept of a game, something he felt other games which include a gravity-flipping mechanism had never done before.

Cavanagh first unveiled VVVVVV on his blog in June 2009. The game had been in development for two weeks, and Cavanagh estimated that the game would be finished in another two, "but hopefully not much longer." A follow-up post published in July 2009 included screenshots of the game and an explanation of the game's gravity-flipping mechanic. Cavanagh wrote that VVVVVV, unlike some of his previous work such as Judith and Pathways, would not be a "storytelling experiment", but rather "focused on the level design". The game was first shown publicly at the 2009 Eurogamer Expo, which gave Cavanagh the opportunity to collect feedback from players. In December 2009, a beta version of VVVVVV which had been given to donors was leaked on 4chan.

The visual style of VVVVVV is heavily inspired by games released for the Commodore 64 8-bit computer from the 1980s, especially Jet Set Willy which is referenced by the element of collecting difficult-to-reach shiny objects and most notably the naming of each room; Cavanagh aimed to create a game "that looked and felt like the C64 games I grew up with." He eventually entrusted naming the rooms to QWOP developer Bennett Foddy, who created every room name in the final version. The graphical style of VVVVVV is heavily influenced by the Commodore 64; similarly, the game's music is heavily dependent on chiptune elements. Swedish composer Magnus Pålsson scored the game, and released the original soundtrack in 2010, titled PPPPPP.