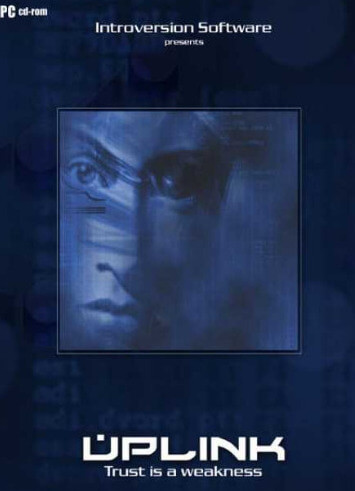 Uplink (known in North America as Uplink: Hacker Elite) is a video game released in 2001 by the British software company Introversion Software. It is a simulator of the cinematic depiction of computer hacking.

In the game, the player assumes the role of a hacker in the year 2010, who begins work for the Uplink Corporation, which is a worldwide company providing work for hackers. The player amasses money, software, gateway hardware and skill in the course of performing jobs for various clients, and hacking servers of global corporations for profit. The storyline of the game begins with the player receiving an e-mail from a deceased top ranking Uplink agent concerning the research done by the Andromeda Research Corporation, related to the Andromeda organization which proclaims the destruction of the Internet. It is constructing a computer virus known as Revelation using artificial life research as a base in an attempt to destroy the Internet. One of the companies, Arunmor, attempts to cross their plans by developing Faith, a counter virus that can purge Revelation. The player can choose between two companies or even ignore the plot in its entirety, concentrating on freelance hacking, in which case the storyline plays out without the player's participation.

Uplink focuses on emulating highly stylised, Hollywood-esque hacking, as seen in movies such as Hackers, Sneakers, WarGames and Swordfish. References to these movies can be found throughout the game, including joke servers for companies such as Steve Jackson Games (which has been raided by the Secret Service) and a nuclear missile control system from WarGames. It also features at least three references to the movie Sneakers, including one which can be found in the first version of the game (and was later removed in an update released by Introversion) which is a cheat code in which the user has to enter "TooManySecrets" (an anagram to the phrase "Setec Astronomy") as the username thus allowing him to access a cheat menu. Another reference to the anagram is the fake password "MySocratesNote", sent to the player in an e-mail which starts the plotline. In addition, the voice print sections use the phrase "Hello. I am the system administrator. My voice is my passport. Verify me." which is similar to the one Sneakers used.

Most of the 'hacking' is of the form: "there is a security system of type X, level Y that is stopping me from accessing or changing something I need to access or change, so I need to have an anti-X program of level Y+". There is some need for rapid selection of programs to run, but there is no actual difficulty in running them (provided that one can afford them).

The game has a certain number of unusual features, including an in-game IRC function to talk to other players and in earlier versions a multi-monitor feature requiring another copy of the game running on a second computer. The latter was removed in later versions due to lack of stability and popularity and, as it was called "Network", was often confused with multiplayer gaming (that the game does not offer).

The game was released for Microsoft Windows and Linux (2012) directly by Introversion, and ported to and released for Mac by Contraband and Ambrosia Software respectively. Chris Delay stated in an interview with PC Gamer UK that they did not pay for advertising of the game at all — it became known purely by word of mouth. A version released in the US was published and distributed by Strategy First under the title Uplink: Hacker Elite. Legal proceedings were undertaken when Strategy First filed for bankruptcy and ceased paying Introversion royalties, but the Hacker Elite version remains available from various sources. The game is now also available via Valve's Steam online distribution service, and via GOG.com, as well as the Ubuntu Software Center. Uplink was also released for iOS on 7 June 2012. An Android version debuted as part of The Humble Bundle for Android 3, on 15 August 2012.

The iOS and PC versions received "generally favorable reviews" according to the review aggregation website Metacritic.

The editors of Computer Gaming World presented Uplink: Hacker Elite with their 2003 "Adventure Game of the Year" award. They summarized it as "an immersive, original, and suspenseful little game."