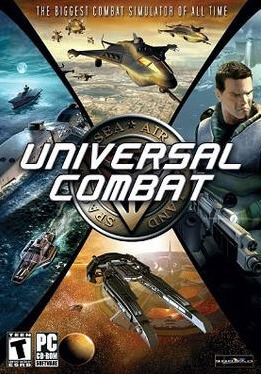 Universal Combat (sometimes abbreviated to UC) is the second video game series by the developer 3000AD and is the successor of the Battlecruiser series of games.

Universal Combat offers the player a very large game world to play in using varying forms of transport and combat. The player can pilot spaceships of varying sizes, as well as land on and explore planets. On land, they can drive varying land craft. The size of the playing area is seen as one of the game's main attractions, where traveling from place to place can take considerable quantities of time as there is no time compression. The game has a high learning curve that is daunting for newer players.

Every crew member aboard the player ship is tracked in location, hunger, AI level, and fatigue. Every system on board the player's starship can be monitored and controlled. In order for the player to fly a shuttle, they must first take time to walk through the ship to the shuttle bay, forcing the player to plan ahead for tactical encounters.

The project began as early as 2000 when Derek Smart announced that he had licensed Croteam's Serious Sam game engine for "Project ABC", for "After Battlecruiser", as replacement for the Battlecruiser Tactical Engagement add-on module intended for Battlecruiser Millennium. The game's scheduled release date was in late 2001, developed for PC and Xbox.

Development started in late 2001 as Battlecruiser Generations, the 5th game in the Battlecruiser series. As part of its design, the upcoming game was intended to make use of newer technology. With a new publisher, DreamCatcher Games, on board and offering more oversight, the direction of the game changed towards more action-based gameplay than the Battlecruiser series had previously been known for. The changes warranted a new title, and the name was changed to Universal Combat.

Universal Combat was not ready in time for the 2003 holidays, despite expectations. It was shipped in early 2004 by the publisher, DreamCatcher Interactive, at half of the originally announced price. Smart pursued legal action against his publisher. A cease and desist letter was issued on behalf of 3000AD to DreamCatcher alleging, among other things, that the price reduction was "clearly calculated to inflict economic harm on 3000AD". In the hearing, DreamCatcher Interactive claimed that the game's quality did not justify a midrange price, citing the graphics as an example of the overall quality of the game. A hearing was held to determine if DreamCatcher would be prevented from shipping the title at the reduced price. The presiding judge denied the injunction, stating that 3000AD "made bold but unsupported assertions regarding the irreparable harm to it", allowing DreamCatcher Interactive to ship the game and 3000AD to proceed with their lawsuit. The matter was later settled out of court under undisclosed terms.

In 2005, 3000AD, Inc. also announced termination of DreamCatcher's publishing right for Universal Combat, but the deal expired on 18 December 2007.

When 3000AD announced they would release the game as freeware, the company reported it had told DreamCatcher to initiate a DIF (Destroy In Field) order to its various retailers so that the remaining copies can no longer be sold, and any unsold copies would be filed as losses in Q4 2007.

The game was reviewed and rated in several print and online game magazines. Metacritic gave it an aggregate review score of 54%. GameSpot scored it 59% and said "This wildly ambitious simulation is torpedoed by an almost incomprehensible interface, the absence of a tutorial, numerous bugs, and many fit and finish issues, including dated production values." Universal Combat was criticized for an unfamiliar interface and voluminous documentation (a manual of over 100 pages, 200-page downloadable appendix, and 80-page downloadable tutorial).

Universal Combat - A World Apart was rated 54% by GameRankings and 48% by Metacritic.