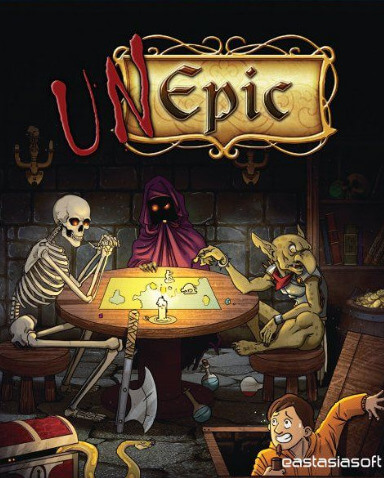 Unepic (stylized as UnEpic) is a video game which was released on September 30, 2011. The game was developed in Barcelona, Spain by Francisco Téllez de Meneses and various collaborators.

Unepic has been translated into over 10 languages, and is available on Steam, Desura, GOG.com, Xbox One, Wii U, PlayStation 4 and Nintendo Switch .

Unepic is a role-playing platformer and Metroidvania game, and includes a number of RPG elements, such as levels, skill points, and equipment. It has non-linear gameplay, and was inspired by the MSX game Maze of Galious. Players can utilize a number of melee and ranged weapons and armors as determined by their level and skill points assigned to an applicable type of equipment. Simple crafting for potions is also available in limited locations, and merchants are present throughout the game, believing the player is a possessed monster. Also included are UNepic Points which are awarded for completion of long and difficult challenges, and allow the purchase of powerful and comical equipment, such as laser guns, flamethrowers, and rocket launchers.

Daniel was just an average guy. He was a great videogame player, a big fan of sci-fi movies, and a novice RPG player. In the midst of an RPG, he was teleported to a castle. At first, Daniel believed that he was having a massive hallucination. Eager to keep playing within the RPG to create his own adventure, he decides to go along for the ride until his delirium comes to an end.

Once inside the castle, Daniel is inhabited by a mysterious shadow. This dark spirit can communicate with Daniel, but not control him. The shadow has a simple goal: to escape from the prison of Daniel's body. There's a catch, though the dark spirit can only escape if Daniel perishes.

Struggling against enemies in the castle, with the dark spirit attempting to murder him at every turn. Daniel finally discovers his goal: to kill Harnakon, the master of the castle, and free the Pure-Spirits who are trapped within. While the stage seems set for a typical role-playing adventure, Daniel will soon discover that everything is not what it seems.

Unepic has received mostly mixed reviews by critics, with the PC version receiving an Metascore of 68 out of 100 at Metacritic, based on 5 critic reviews, and mostly positive reviews by players, with an average rating of 8.4 User Score based on 184 ratings. It received a score of 6.5/10 on Destructoid. The game ranked 10th at the Indie of the Year awards of 2011. Unepic was included in the July Jubilee bundle, part of the series of bundles on Indie Royale. As of September 14, 2015, UnEpic has received a 94% positive review rating on Steam (out of 3490 reviews).