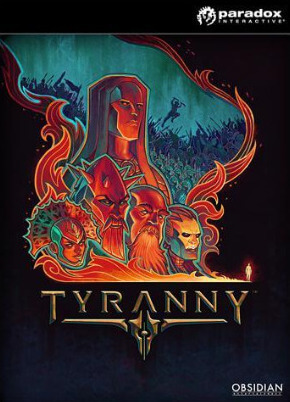 Tyranny is a role-playing video game developed by Obsidian Entertainment and published by Paradox Interactive. The game was released for Microsoft Windows, OS X, and Linux on November 10, 2016.

While not a sequel, Tyranny builds upon the gameplay and engine used in Obsidian's previous title Pillars of Eternity, allowing the developers to spend more time on crafting a game where player choices have a more meaningful effect on the game's story. The game starts after the evil overlord Kyros has already conquered the world, and where the player-character, a Fatebinder, is one of the higher-ranked members in Kyros' power structure. As a Fatebinder, the player must travel the world to help restore order after Kyros' victory, and make decisions on how to handle the various factions of survivors, which can affect what companions, spells, and abilities the player may select from.

Tyranny takes place on Terratus, a high fantasy world where technology is transitioning from the Bronze Age to the Iron Age. The Overlord Kyros, a god-like being of immeasurable power, is close to completing their over-400-year-long campaign to conquer Terratus and impose order, having already overtaken much of the land through force or intimidation. As part of Kyros' public persona, Kyros has remained unseen, leaving their subjects unsure if Kyros is male or female, a team, a title handed down in a dynasty, or a multi-headed beast. Beneath Kyros are the Archons, men and women imbued with strange and unique magical powers, made seemingly immortal by Kyros. Archons rule over regions, districts, armies, or individual groups on Kyros' behalf. Archons in Tyranny include executioner Bleden Mark, Archon of Shadows, the plague-spreading Pox, Archon of Ruin, the mighty Cairn, Archon of Stone, and Tunon the Adjudicator, Archon of Justice and creator of the Fatebinders. Fatebinders are high ranked agents in Kyros' forces, tasked to travel the world to restore order, reduce conflict, and maintain Kyros' rule, serving as judge, jury, and executioner.

Tyranny takes place in the 431st year of Kyros' self-devised calendar in the region of the Tiers, the final major area to be conquered . There is a rebellion brewing due to infighting between Kyros' two main forces in the Tiers, the elite and disciplined Disfavored led by Graven Ashe, Archon of War, and the chaotic and barbarian Scarlet Chorus led by the Voices of Nerat, Archon of Secrets. The player takes the role of a Fatebinder, tasked by Kyros to quell the rebellion or be destroyed along with everyone else in Vendrien's Well.

During the Fatebinder's quest, they can recruit a number of companions including: the mage Sirin, Archon of Song, the uncompromising Barik of the Stone Shields, the fierce warrior Verse, the sage Lantry, the water mage Eb, and the humanoid, feral beast woman Kills-in-Shadow.

The world of Tyranny also features a number of colossal ruins from a previous, unknown civilization. These include the Oldwalls, magically attuned spans of walls that run for hundreds of miles, and the Spires, monolithic towers that reach higher into the sky than most mountains. For reasons unknown, Kyros forbids entry to these structures on pain of death.

The game begins several years after the conquest of the Tiers, the last major region that resisted Kyros' rule. A new rebellion has risen in the Tiers kingdom of Apex, in the region of Vendrien's Well, and Kyros has grown angry with her armies' failure to quell it. The Fatebinder is dispatched to Vendrien's Well to resolve the bickering generals' disputes and end the siege of the rebel fortress, or every living thing in that region will be destroyed by one of Kyros' Edicts, a form of magical superweapon and one of the few ways Kyros directly enforces order throughout the realm. Working together with Graven Ashe, Archon of War and leader of the Disfavored, and the Voices of Nerat, Archon of Secrets and leader of the Scarlet Chorus, the Fatebinder fights their way through the rebel forces to reach their fortress of Ascension Hall. When the time comes to assault the fortress, however, the feud between the two Archons climaxes - after the Fatebinder chooses one of the two armies to lead the assault, the other declares war on the opposing army in outrage. Despite this sudden conflict, the Fatebinder penetrates Ascension Hall and ends the siege with the help of their chosen army. Alternatively the Fatebinder could have secretly allied themselves with the rebels and betrayed both Archons. However, after fulfilling the terms of the Edict and ending the siege, the diffused magic alters the Fatebinder in unforeseen ways.

The Fatebinder finds themselves absorbing the power of Kyros' Edict and transported to the summit of the Mountain Spire, the monolithic ancient tower at the centre of Ascension Hall and one of many Spires that dot the Tiers and Northern Empire. The Fatebinder is the first person in recorded history to do so, causing much debate in Imperial and Tiersman circles. Meanwhile the feud between Ashe and Nerat boils over into a fullscale civil war, the 'War of Archons', with the Disfavored and Scarlet Chorus battling for control of the Tiers. Tunon summons the Fatebinder to his court in the Bastard City to account for their actions and tasks them with investigating both Archons for treason, as this civil war has jeopardized the pacification of the region. Allying themselves with one of the armies in the war, or neither and following their own path or fighting for the rebels, the Fatebinder sets out to discover the nature of their newfound power and their connection with the Spires, claiming new Spires and growing in power along the way.