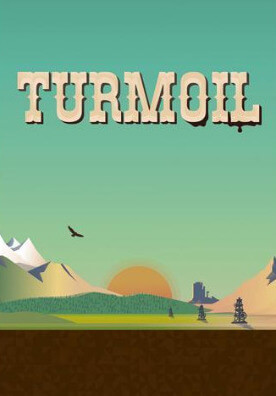 Turmoil is a simulation video game by Gamious released on June 2, 2016. It is available on Steam and iOS.

Turmoil is inspired by the 19th century oil rush in North America. The player has to earn their way to become a successful oil entrepreneur. As the player make money digging up and selling oil, the town will grow along with them, allowing the player to buy upgrades, such as more horses or bigger pipes. Campaign mode allows the player to buy land at an auction, and dig for oil using dowsers, moles, or scanners, earning as much as they can in one year. The player goes up against three rival AIs in each level.

The game was received as being an extremely simple game, but had too much repetition. It was also cited as "the epitome of simplicity" and "an addictive and nostalgic management strategy".