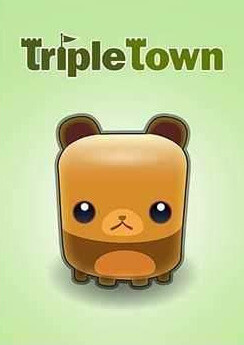 Triple Town is a freemium strategy puzzle video game with city-building elements. It is available for social networks and mobile devices and was developed by Seattle-based Spry Fox.

The casual game was originally released for the Amazon Kindle e-reader in 2010, and was ported to the Facebook and Google+ social networks in October 2011. It was published in January 2012 for iOS and some Android devices. It was released for Windows and Macintosh through Steam on December 6, 2012.

The premise of the turn-based, single-player game is that the player must build a new settlement. The game takes place on a 6×6 grid of fields on which some tiles are randomly placed.

Players are given random tiles, most often grass tiles, that they must place on the grid. When three or more identical tiles adjoin, they merge into one more advanced tile at the position of the last tile placed: three grass tiles become a bush, three bushes a tree, three trees a hut, three huts a house, and so forth. Merging four or more tiles earns coins or a tile which is held in the inventory located in the sidebar. There are three special tiles: bears, crystals, and imperial bots. Bears move to a neighboring square each turn, blocking building sites until they are trapped. Ninjas act the same, except they can move to any empty square on the board. When they are trapped or an imperial bot is used on them, they turn into a gravestone. Three gravestones make a church, three churches a cathedral, and so forth. Crystals can be used as a wild card to make any match. Imperial bots remove individual tiles, or, if used on bears, turn them into gravestones. The player may keep one tile in reserve in the storehouse, usually located in the top left corner of the screen, and use it when needed.

The objective of the game is to upgrade one's settlement's tiles to as high a rank as possible, earning an accordingly high score. The game ends if all fields of the grid are filled.

In Triple Town on the Web, there are two types of in-game money: coins and diamonds. Each can be purchased using real money, although coins can also be earned during gameplay. When a user first plays Triple Town, they are given several thousand coins and a small number of diamonds. In the mobile version of the game, there are only coins, not diamonds.

Triple Town received positive reviews. Reviewers praised the game's innovative extensions of the match-three mechanic as well as its strategic depth, unusual for a casual game, which requires players to plan several moves ahead in order to be successful. Criticism focused on the game's limited content and its implementation of the freemium business model: while the game is free, it comes with a limited number of turns. Once these are used up, they regenerate slowly, or may be purchased with in-game or real money. The turn limit can be permanently removed with a one-time payment.