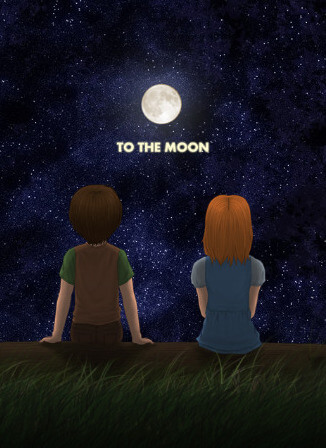 To the Moon is an adventure game developed and published by Freebird Games. It was originally released for Microsoft Windows in November 2011, with ports later being released for Mac OS X, Linux, Android, iOS and Nintendo Switch. The story follows two doctors who offer to fulfill a dying man's last wish using artificial memories. The game features relatively few gameplay mechanics, with the player controlling the two doctors, exploring the narrative and solving puzzles as they try to reconstruct the dying man's memories in order to fulfill his wish.

The game was designed by Kan Gao using the RPG Maker XP toolkit. Development started in 2010, when Gao was struck by questions of mortality following his grandfather's life-threatening condition. To the Moon would become Freebird Games' first commercial product, following smaller, experimental games released for free on the studio website. The game was updated later to include free downloadable content, called "minisodes", to give more context to the main characters. In 2014, Freebird Games released A Bird Story, a short "minisode" that connects To the Moon with its sequel, Finding Paradise.

While criticized for its lacking gameplay, To the Moon received praise for its narrative and music, thematic material and emotional power. The game was nominated for several awards by gaming outlets, earning "Best Story" from GameSpot's 2011 end-of-year awards. Retrospectively, To the Moon is highly regarded by critics and players alike for its story, with some considering it as an example of artistic expression in video games. An animated film adaptation is in development, and will be partially scripted and supervised by Gao.

To the Moon is built on the RPG Maker XP engine, which is used to create 16-bit 2D role-playing games, in the style of Dragon Quest or Final Fantasy. However, unlike a typical RPG, To the Moon has no battle system (aside from a joke battle near the beginning), inventory system, nor party system. The game's focus, being a more story-driven game, is around puzzle solving, interpreting information from the subject's (Johnny's) life, and finding ways to get deeper into his memories.

Gameplay is primarily about exploring Johnny's memories to find significant objects and collect energy from them to strengthen the memory and connect to a more distant one, from Johnny's old age leading back to his childhood. Occasionally, the player will have to explore Johnny's house and the surrounding area for certain clues, if they cannot gather enough energy from a certain memory, or don't know how to proceed to a further one.

Once the items are all gathered and the player has seen all the memories, they can connect certain objects that exist across two different memories to move freely between them. At this point, the player can begin manipulating the memories, by changing around characters, objects and events, to make Johnny believe he had achieved his dream of going to the Moon.

Sigmund Corp. uses a technology that can create artificial memories. They offer this as a "wish fulfillment" service to people on their death beds. Since these artificial memories conflict with the patient's real memories, the procedure is only legal to do on people without much time left to live.

Sigmund Corp. employees Dr. Eva Rosalene and Dr. Neil Watts are tasked with fulfilling the lifelong dream of the dying Johnny Wyles. Johnny wants to go to the Moon, although he doesn't know why. The doctors insert themselves into an interactive compilation of his memories and traverse backwards through his life via mementos. With each leap to an important moment in Johnny's memories, they learn more about him and what brought him to his current position in life, including his largely unhappy marriage to his childhood sweetheart, River. Upon reaching his childhood, the doctors attempt to insert his desire to go to the Moon. In theory, Johnny's mind would create new memories based on that desire, and Johnny would die believing he lived without any regrets.

Johnny's mind does not create the new memories as planned. Dr. Watts and Dr. Rosalene must solve the problem to fulfill Johnny's dying wish of going to the Moon. Eventually, it is revealed that Johnny and River met as children at a carnival. They looked at the night sky and made up a constellation: a rabbit with the Moon as its belly. The two agreed to meet at the same place the following year, with Johnny promising that should he forget or get lost, the two would "regroup on the Moon". That night, Johnny gives River a toy platypus which River treasures for the rest of her life. Shortly after, Johnny's twin brother Joey was killed in an accident. Johnny's mother gave him beta blockers to induce memory loss of the tragic event, also causing him to forget his first encounter with River. He later happened to meet her again and eventually marry her. River later realized that he had forgotten their meeting at the carnival, after Johnny confessed that he approached her in school because she was different, and that he thought that was their first meeting. River, who is strongly implied to have Asperger syndrome (the game references Tony Attwood, who wrote numerous books about Aspergers), did not tell Johnny directly about their first meeting; instead, she tried to indirectly jostle his memories by cutting her hair and crafting paper bunnies, including a dual-colored one representing the constellation they made up during their first encounter, combined with the blue-and-yellow dress she wore on their wedding. River was unable to make Johnny remember before she died, and Johnny was left with lingering guilt and an inexplicable desire to go to the Moon.

In the present, Rosalene and Watts eventually implant a memory sequence in which Joey did not die, and lived on to become a popular author, and Johnny did not meet River again until they started working together at NASA. As the comatose real-life Johnny begins to die, he imagines going on a Moon mission with River. During the launch, River holds out a hand to him. The Moon appears through a window on the ship, and Johnny takes her hand as his heart monitor flatlines. In the epilogue, Johnny and River eventually get married, and build and retire to the same house where the real-life Johnny and River lived. Also, in the new memories Joey was part of Johnny's life, being at his wedding, meetings with friends and even in the construction of the house. Rosalene and Watts, now back in the real world, look to Johnny's grave, which is placed adjacent to River's. They reveal to the audience that Johnny willed the house to his caregiver, Lily. Rosalene receives a phone call, and the two move on to their next patient. While Watts is leaving, he stops and the screen briefly flashes red, the same way it did when Johnny felt pain. Watts takes some painkillers, then follows Rosalene to their next adventure.

To the Moon System Requirements

(0) Comments on "To the Moon Full Version"