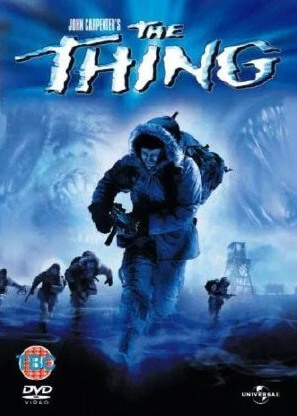 The Thing is a 2002 third-person shooter survival horror video game developed by Computer Artworks and co-published by Universal Interactive under their Black Label Games publishing label and Konami.  It was released for Windows, Xbox and PlayStation 2. Game Boy Color and Game Boy Advance versions were also planned, but both were cancelled early in development.

Set as a sequel to John Carpenter's 1982 film of the same name, the story focuses on Captain Blake, a member of a U.S. Special Forces team sent to the Antarctic outpost featured in the film to determine what has happened to the research team. The game was endorsed by Carpenter, who voices a character in an uncredited cameo.

The Thing was a commercial success; selling over one million units worldwide across all platforms, and received generally positive reviews. A sequel was in the early stages of development, but was cancelled when Computer Artworks went into receivership in 2003.

The basic gameplay in The Thing is that of a traditional third-person shooter; the player character, Blake, can run and shoot, strafe, crouch, interact with the environment, interact with NPCs and use items, such as flashlights, fire extinguishers or flares. The player also has the option to enter first-person mode for more accurate targeting during combat. When in first-person mode, however, the character cannot move, except to side-step a little to the left and right. Weaponry includes pistols, grenades, sniper rifles, flamethrowers, shotguns, submachine guns, assault rifles, grenade launchers and fixed heavy machine guns. Other items featured in the game are health packs, explosives, ammunition, portable blood test-kits and adrenaline injections.

Enemies come in three main varieties. "Scuttlers" are small Things formed from the limbs and appendages of infected personnel. They are fast, but weak, and can be killed simply by shooting. "Walkers" are larger than scuttlers, and much stronger. To kill them, the player must weaken them using gunfire before then using the flamethrower, as only fire can completely kill them. Bosses are larger and much more powerful than Walkers, and although each one requires a specific strategy to defeat, the principle is the same; weaken it with gunfire before burning it.

One of the main features of The Thing's gameplay is the inclusion of multiple NPCs who join Blake at various points throughout the game. At any one time, the player can control up to four characters; Blake and three NPCs. There are three types of NPC in the game; engineers, soldiers and medics. Engineers can repair fuse boxes, which control locked doors, computers and save points. Soldiers have more health, and are better shots than engineers or medics. They are thus more suited to combat. Medics are capable of healing both Blake and any other injured NPCs, and carry unlimited health packs. The player can issue basic commands to each NPC, such as ordering them to follow Blake, ordering them to remain where they are, ordering them to give Blake their weapon, and, in the case of engineers, ordering them to fix a fuse box.

NPC AI is determined primarily by the "Fear/trust system". The trust system determines whether the NPCs will follow Blake's orders and join him in combat. To do so, the player must ensure the NPC trusts Blake, and does not suspect him of being a Thing. NPCs have four levels of trust; red, amber, green and 100%. Red means they are convinced Blake is a Thing and will attack him. Amber means they are not sure if he is a Thing, and although they won't attack him, they won't follow his orders. Green means they trust him and will follow his orders. 100% means they have complete faith in him, will follow his orders, and even if he attacks another NPC, they will support him. To gain the trust of NPCs, Blake can give them weapons and ammo, heal them, put himself at risk to protect them, or use a blood test kit on himself to prove he is not a Thing. Actions which deplete trust include accidentally shooting teammates, taking away teammate's weapons or ammo, or pointing a weapon at them for a sustained period of time to force them to do something.

The fear system dictates how scared a given NPC is. There are three levels of fear; normal, scared and "Crack-up". When an NPC enters "Crack-up" mode, Blake has only a limited amount of time to reduce their fear level, or the NPC will kill themselves, attack Blake and other NPCs, attack the environment, or die of a heart attack. Each NPC responds differently to different surroundings; for example, medics tend to scare easier than soldiers. Generally, however, fear increases when entering rooms covered in blood, entering dark locations, finding particularly disfigured corpses, being attacked by multiple enemies, and hearing enemies but not being able to see them. When an NPC is scared, it affects their performance; soldiers become less accurate, engineers take longer to repair fuse boxes and medics don't heal characters as quickly. Blake can reduce fear by giving NPCs adrenaline, topping up their ammo, moving away from particular locations, or successfully defeating enemies.

The game also features an infection system, which determines whether or not an NPC is infected by the Thing. Although most NPCs are scripted to transform into a Thing at specific points in the game, they can also be infected at any time prior to this. When the team comes under attack by enemies, the possibility of infection is based upon a probability system whereby any teammate who comes into direct contact with an enemy can be infected. Although infection does not alter their immediate behavior, it will result in them turning into a walker-Thing after a set period of time, at which point they will attack the team.

The Sum of All Fears
hit
upd
new

(0) Comments on "The Thing Full Version"